Eight of the hottest tickets in town!

Let me start by saying that I am bilingual when it comes to sport.  I can call this particular sport "soccer" or "football" depending on who I am talking to.  I don't do the whole debate about "it's not soccer, it's football".  That has become pretty tiring and pointless.  It is usually the football purists who get angry when the word "soccer is used.  An interesting fact is that the word soccer was actually coined in England  (here is a short article about the origins of the word soccer).  For the duration of this blog post I will be referring to it as football.

On the 26th of March Japan had the chance to become the first country to qualify for the 2014 World Cup.  All they needed from their game against Japan was a draw.  Oman caused a huge upset and won the game.  From that point on, tickets for Japan's next game became a valuable commodity.  Realising that it would be next to impossible to get a ticket here in Japan (the tickets were actually sold by a lottery system.  50,000 tickets were available in Japan and 500,000 people applied for 1!!) I decided that I would get some tickets via the Football Federation Australia.  When they were made available, myself and a good friend, Charlie, jumped online and were able to get 8 tickets.  We got together a group of people (of which I was the only Australian supporter!) who were keen to go and waited for the day to arrive.

A few of us decided to meet at a bar for a drink before heading off.  As we were in the bar, a couple of  other Australian supporters came in for a beer too. 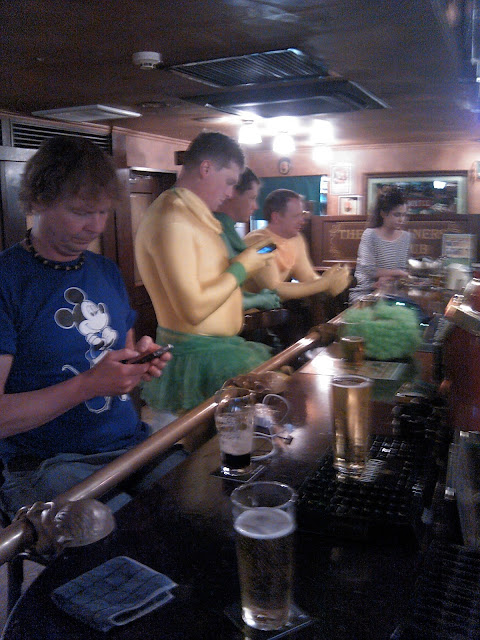 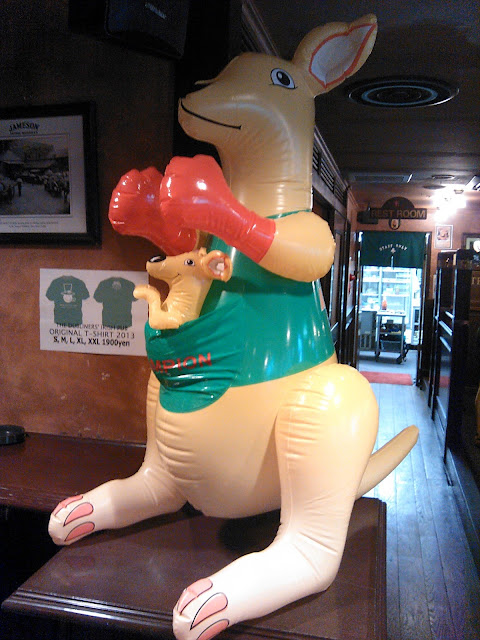 They were a big hit with everyone in the bar and even later posed for photos in the train station nearby!

Once everyone had gathered we headed off to catch our train.  Mark and Charlie leading the way.  I was happy that Mark came along.  He is a football purist and is from England but promised to remain neutral. 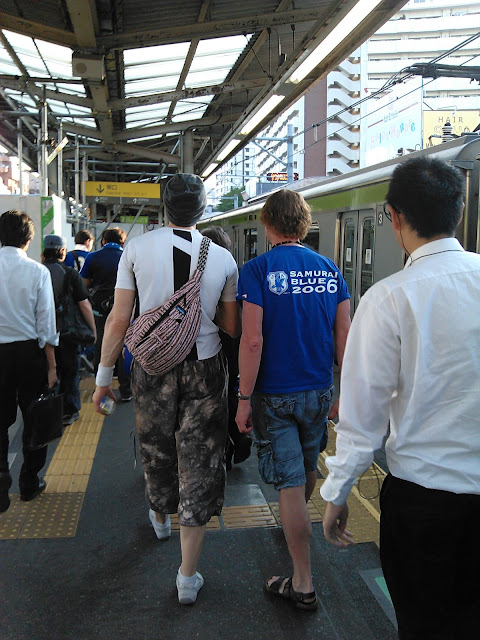 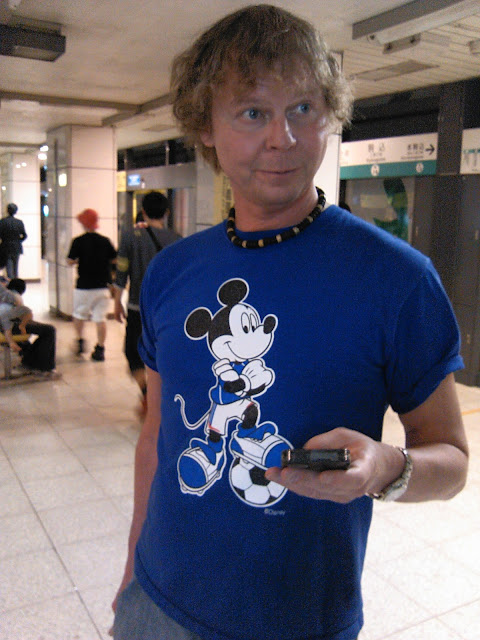 Akane and Teruyo.  Teruyo is one of my former students from when I used to live in Japan before.  It was her first time to go and watch a big game like this in the stadium. 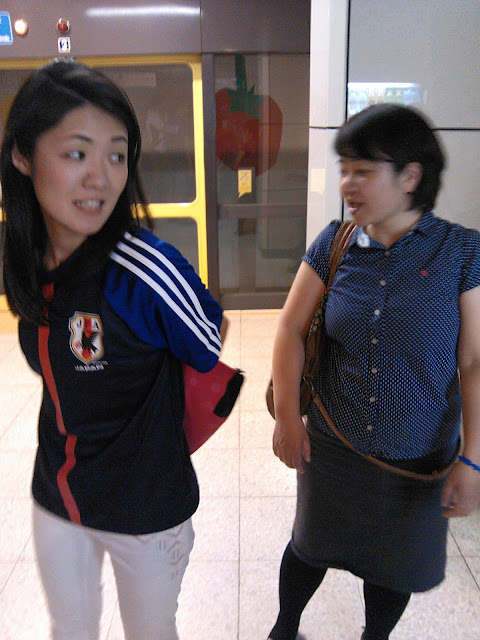 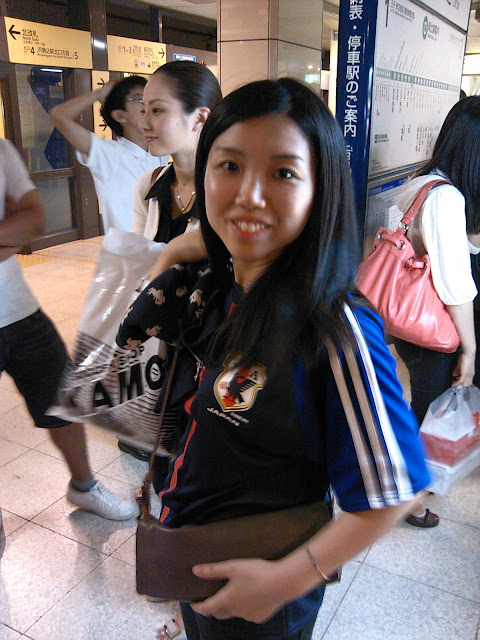 The train (unsurprisingly) was very crowded as it was about 5:30pm so not only were there people going home after work, but also people going to the game.  Through the crowds I could just make out a couple of Australian shirts. 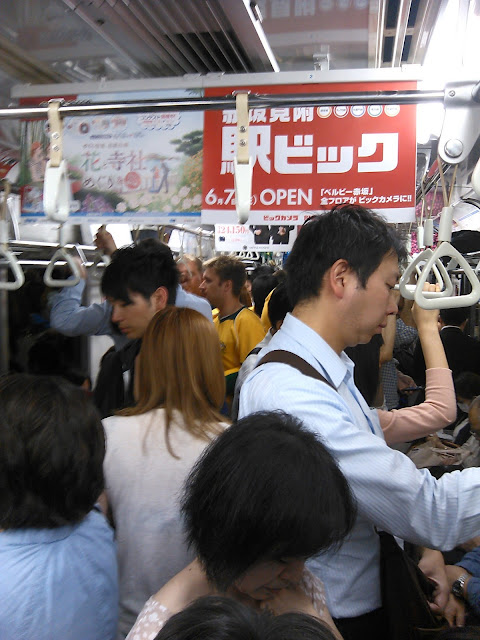 The game was being held at Saitama stadium which is a stadium that was built for the 2002 World Cup jointly hosted by Japan and Korea.  It is now the home of the Urawa Red Diamonds of the J League and has a capacity of nearly 64,000.  The stadium is about a 40 minute train ride for the middle of Tokyo and then a 20 minute walk from the station.  The station at the end of our train ride was jam packed full of people and there was a big bottleneck at the ticket gates. 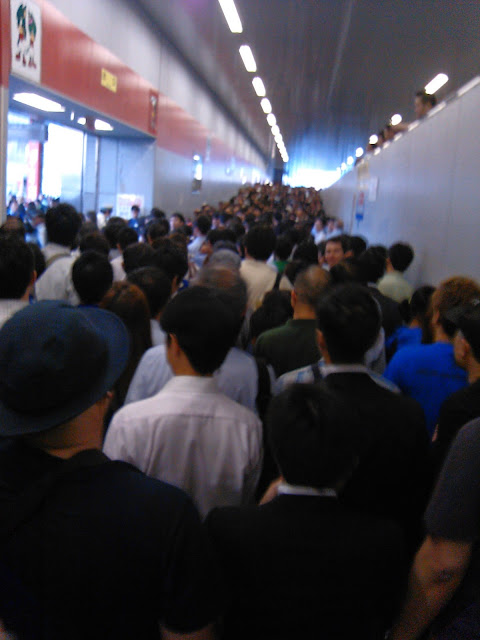 We finally got outside and you could feel the excitement building in the air as off in the distance you could just see the stadium. 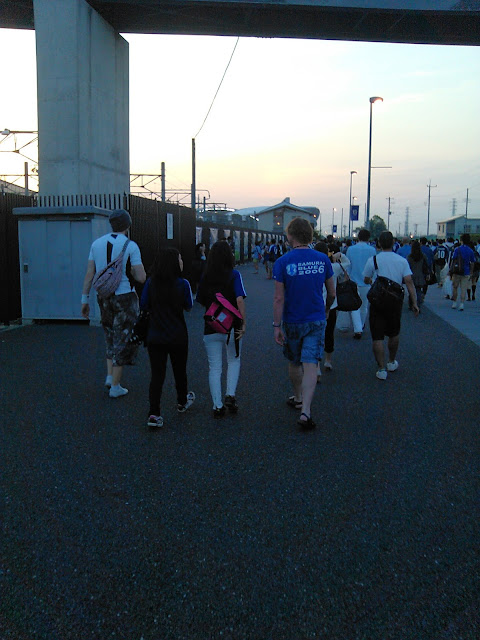 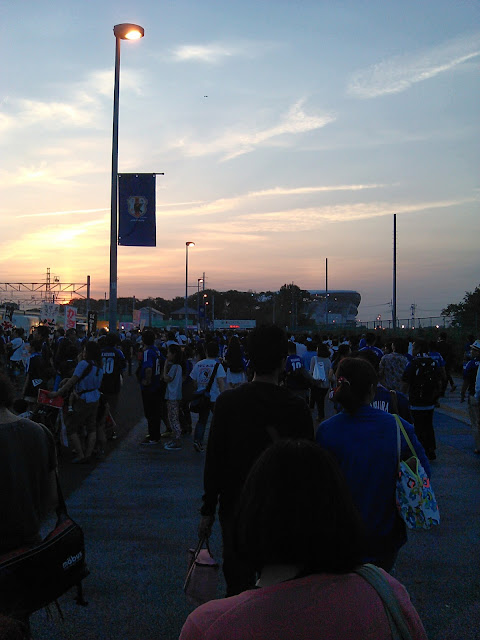 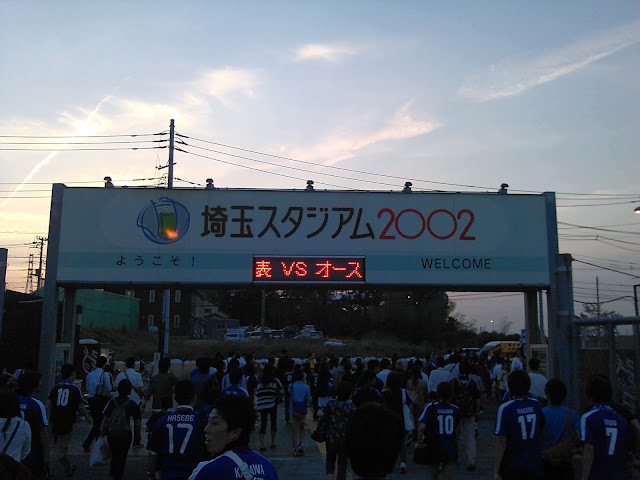 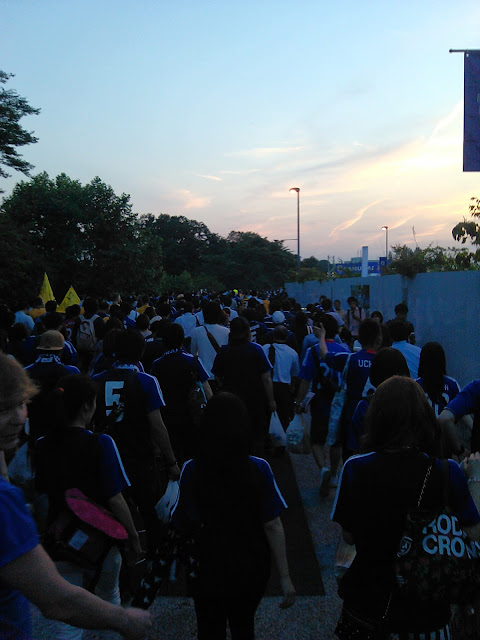 We finally reached it and excitedly made our way inside! 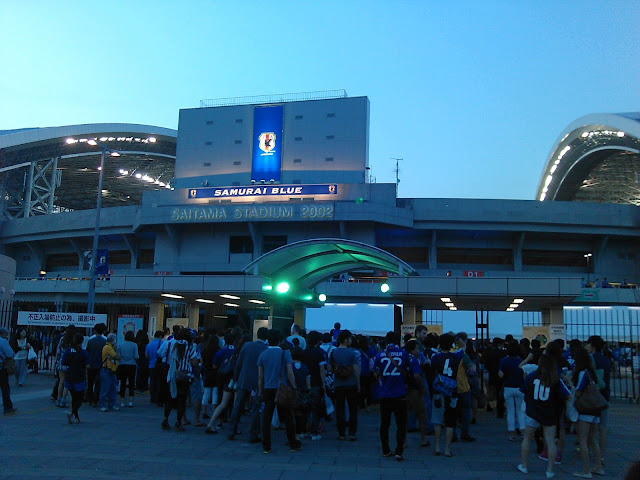 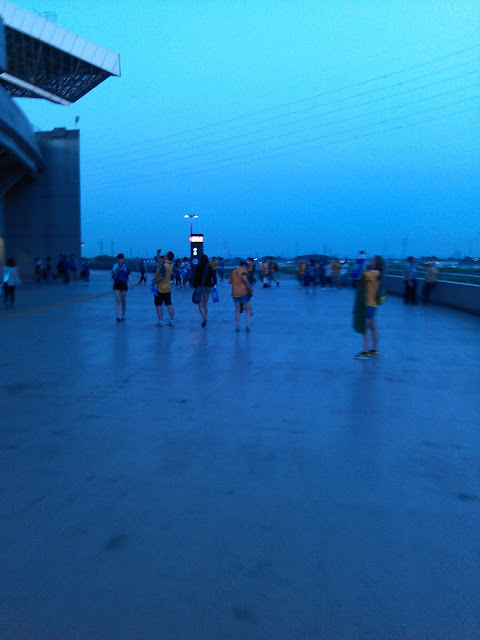 As we made our way in to find our seats something happened that made me quite angry and offended.  All of the Japanese people in our group were told to take off their Japan shirts before finding a seat.  Now, I love Japan and have decided to call Japan my home, but one thing the Japanese Football Association needs to learn is that Caucasian doesn't equal hooligan.  Now I don't get angry very often at all, but I gave the stadium attendant a huge mouthful, demanding an explanation as there were Australian supporters sitting quite comfortably in the Japanese section wearing their Australian Socceroos shirts.  I think that the attendant must have asked to be transferred to another section as when I walked past his spot next time, a different guy was there. Anyway, that is all I will say about that, but I will be getting in contact with the JFA to ask for an explanation.

So we found our seats and the noise inside the stadium was already deafening from the chanting and drum playing of the Japanese supporters. 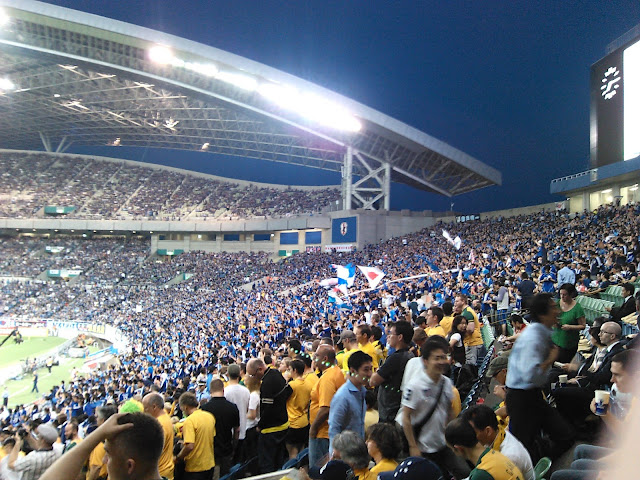 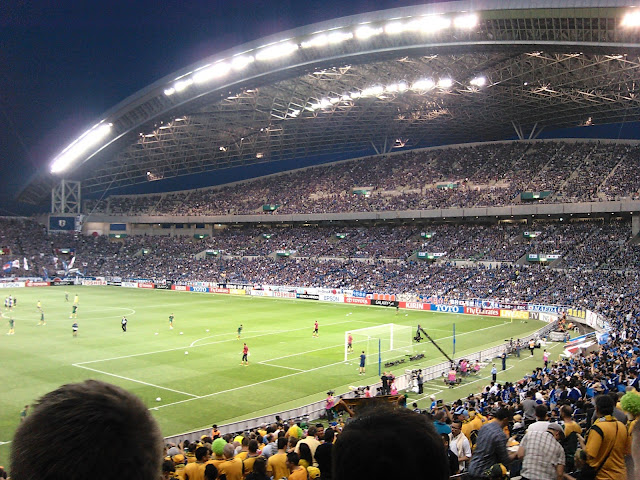 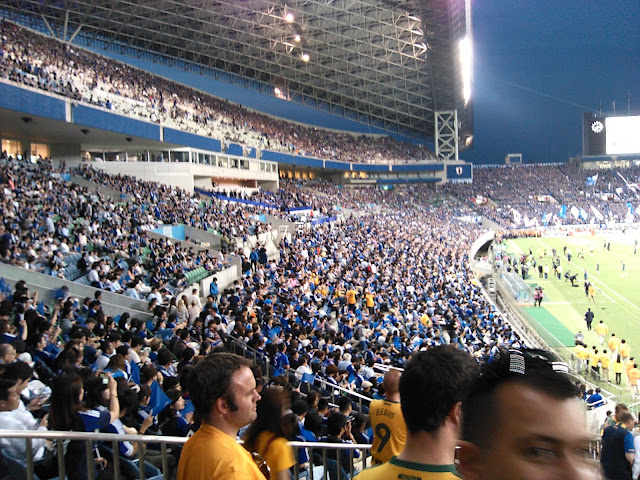 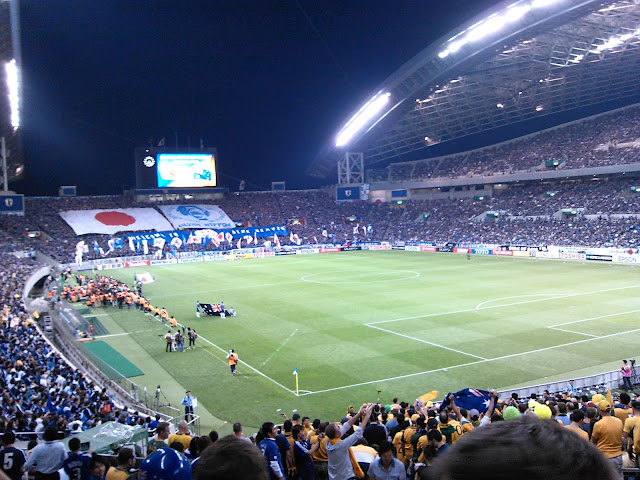 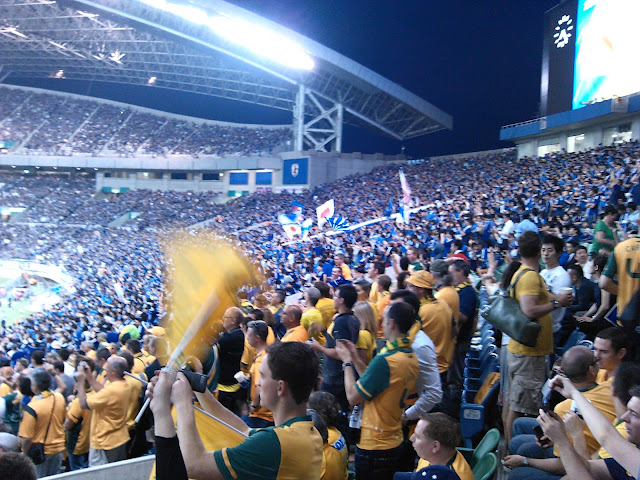 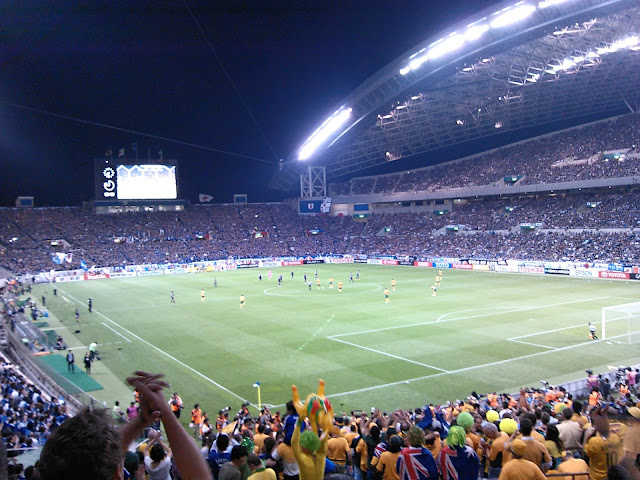 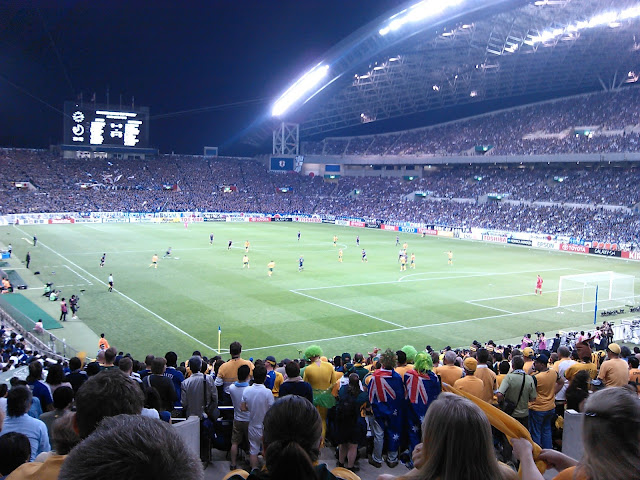 It was simply the most exhilarating sporting experience I have had!  The atmosphere was incredible, the game was close and everyone had a great time.  The result?  Well,the Japanese team is much stronger than the Australian team as the Aussies are currently going through a transition phase where a lot of the Golden Generation of players are retiring and the new guys are coming through.  I said before the game that I would be happy with a draw, considering how strong Japan is.  With about 2 minutes to go, Australia was up 1-0 and then gave away a penalty for a handball inside the box.  Japan's gun midfielder, Keisuke Honda stepped up to the penalty spot and calmly slotted the ball straight down the middle as Mark Schwarzer dived to his left.  A draw was what I ended up with, but it all felt a bit hollow after Australia had almost gotten away with a win.

So we got back on the train again and made our way back to Tokyo with both sets of spectators dissecting the game on the way home. 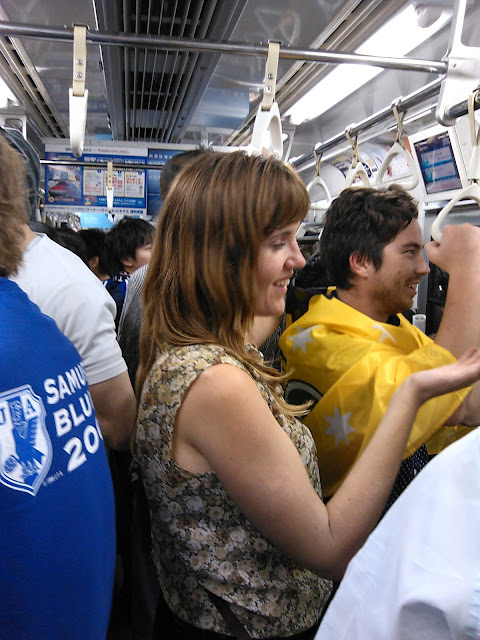 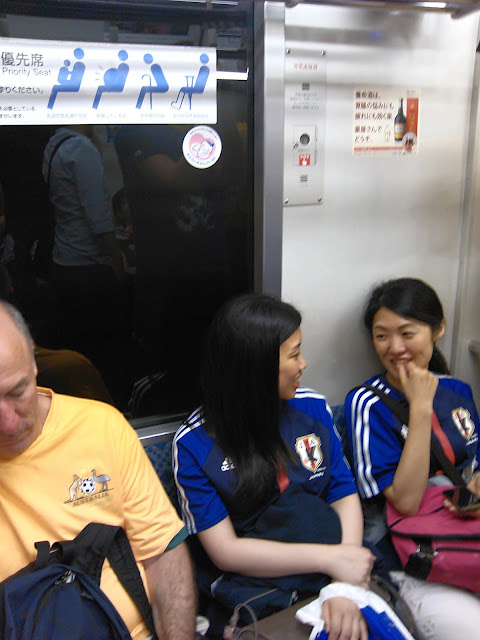 That's it for this week.  Thank you for reading and I hope you are all well.

Take care and see you again next week.
Posted by jase8au at 02:06