People often ask me if I have been to Tokyo Skytree and I always tell them that I am not really interested in it.  I do not want to pay nearly 4,000 yen to go to the top.  I much prefer going to the Tokyo Metropolitan Government building in Shinjuku where they have an observation deck that is free.  Sure, it is less than half the height of Skytree but you can see everything fine from 200 metres up!  While wandering around the Metro Government building enjoying the panoramic view of Tokyo you will notice a rather large patch of green not far away from the building.  You can't miss it as it stands out like an elephant in an elevator, covering a 144 acre area.

Shinjuku Gyoen's history can be traced back to 1590 when a large tract of land was given to Kiyonari Naito by Ieyasu Tokugawa.  It remained a private residence until the early Meiji period (1872) when it became an agricultural study centre.  In 1879, the land was handed over to the Imperial Household Ministry and in 1906 the garden was completed.  It was designed by French landscape gardener, Henri Martinet, who followed an idea of acclaimed Japanese agricultural scientist Hayato Fukuba.  Unfortunately most of the garden was destroyed during the air raids in 1945.  However, using a birds eye view of the park that had been drawn by Martinet, the garden was rebuilt and opened to the public in 1849.  It is now a massively popular place for Tokyoites to enjoy their own little mesmerising patch of green in the middle of Tokyo.  It is much loved all year round as each season it presents a distinctly different face as seasonal flowers blossom and disappear only to be replaced by another variety.

I decided to head along to the park one day recently to have a look.  Shinjuku Gyoen is accessible via a short walk from a number of stations in the Shinjuku area, Shinjuku station, Shinjuku gyoemmae station, Sendagaya station and Shinjuku-sanchome station.  Walking up to the entrance 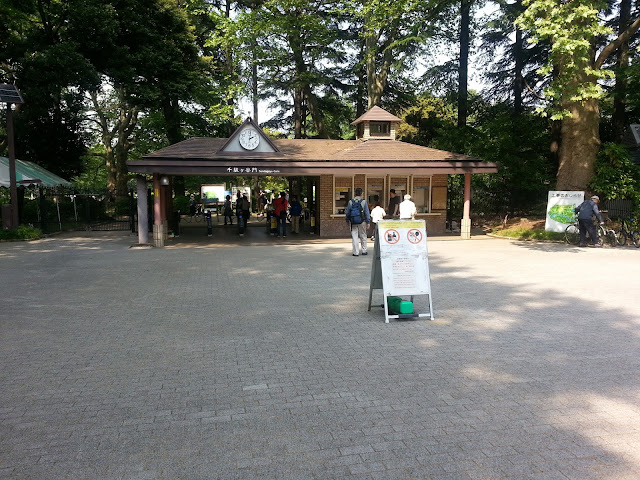 I paused at the ticket machine (English available) and paid my 200 yen entrance fee and stepped inside.  The lady at the gate handed me an English map and guide and off I went.  The day I visited was part of the traditional Golden Week holiday period when many workers can take a certain number of days off (this year it was 6 calendar days separated halfway through by one work day) and so there were many people out and enjoying the sunshine and lovely late spring weather. 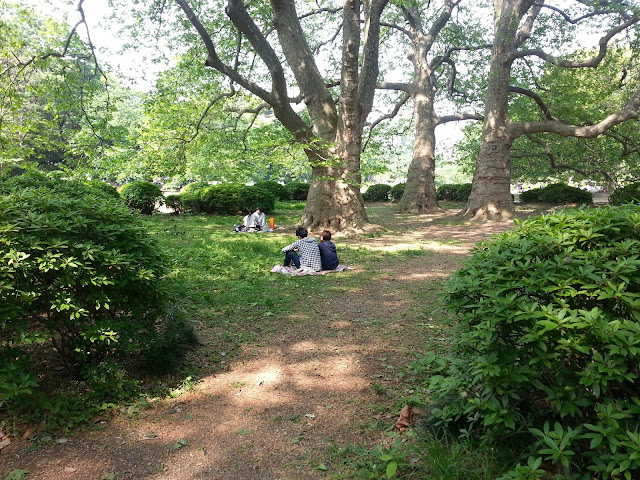 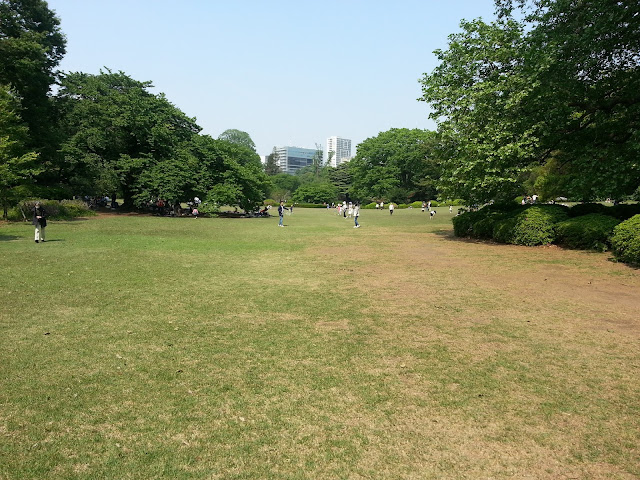 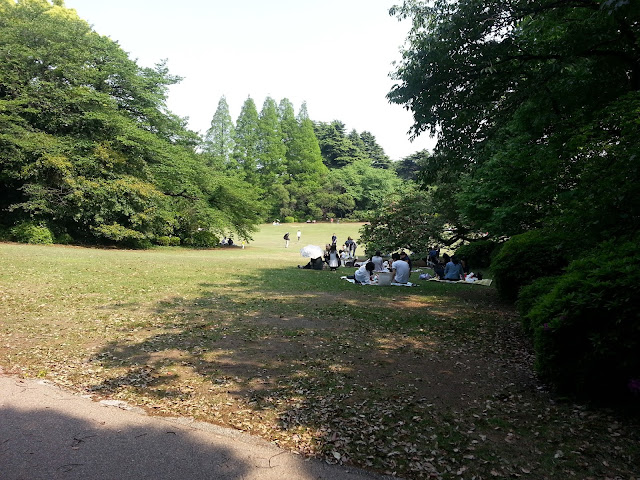 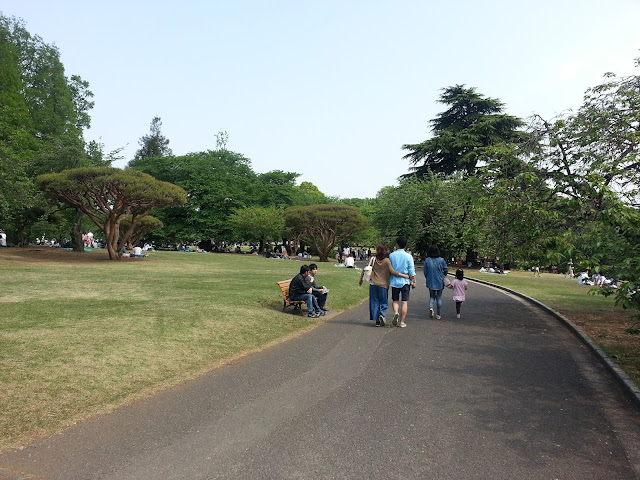 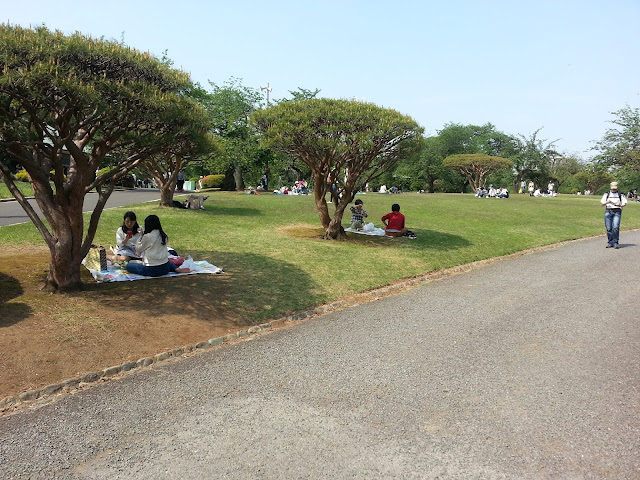 As with a lot of large Japanese gardens and parks, there was a few different perspectives in the garden.  In one area there is a French inspired garden and another area offers an English landscape feel.  For me though, it is all about Japanese gardens.  Sure, the English and French areas were nice, but you absolutely cannot beat a Japanese garden for serenity and tranquillity. 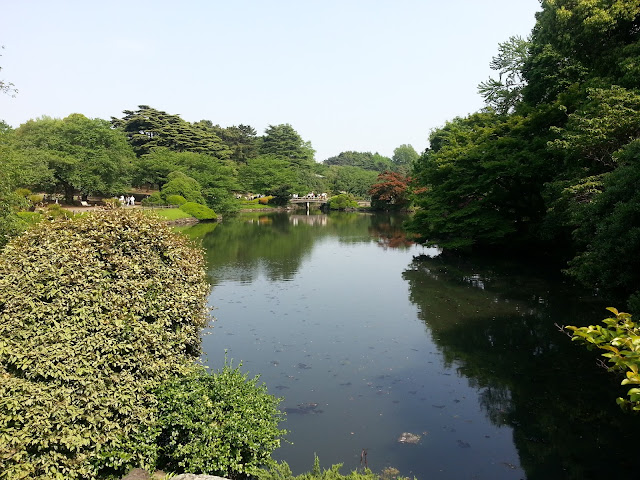 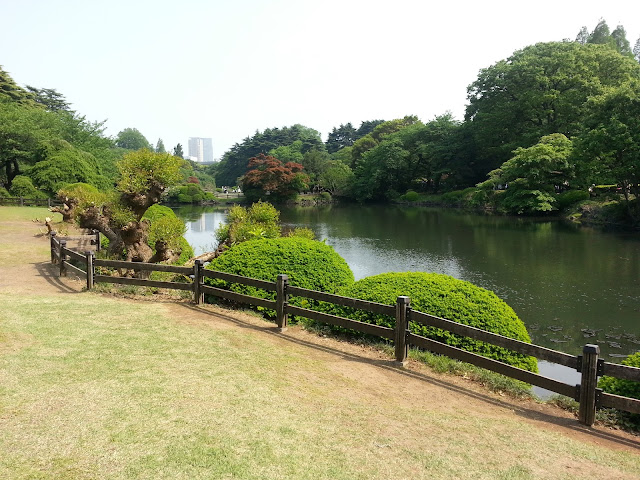 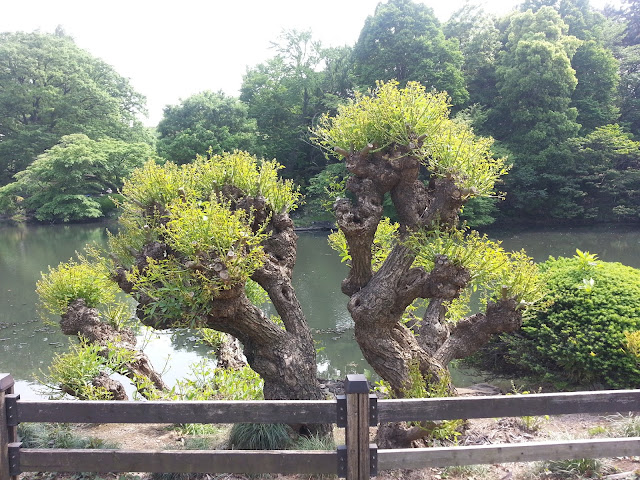 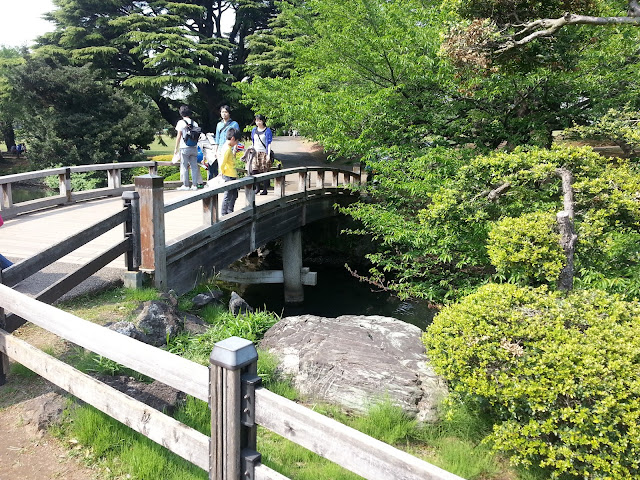 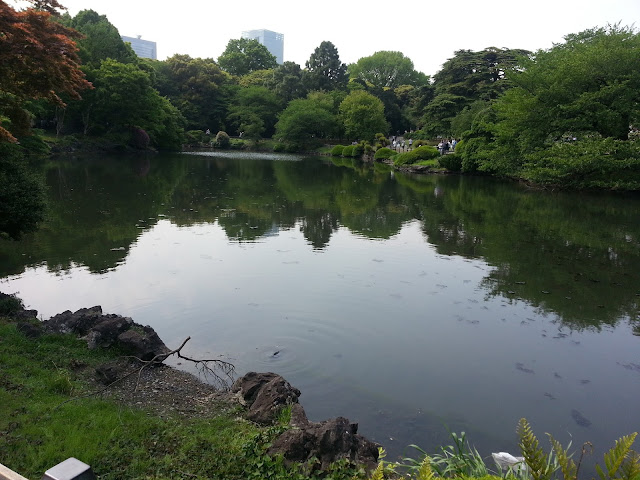 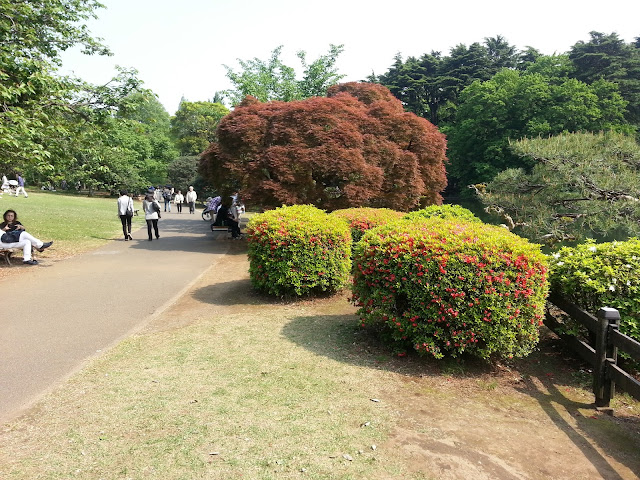 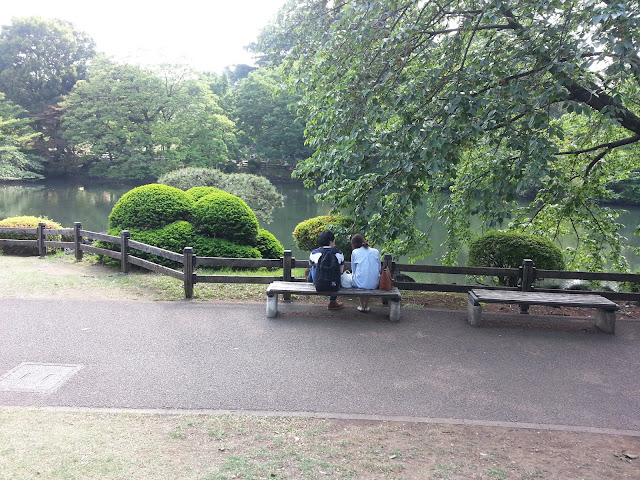 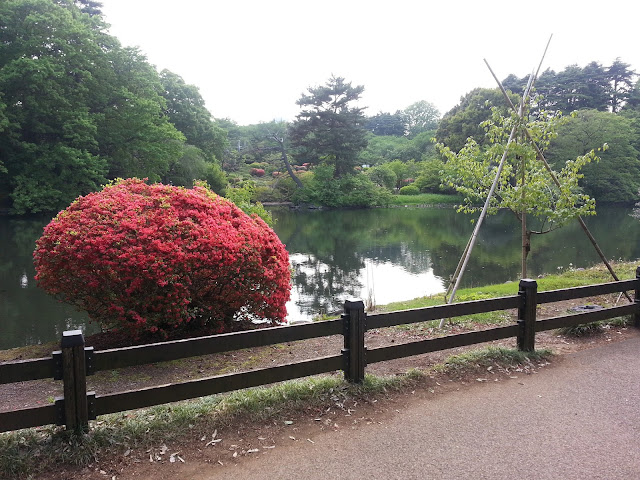 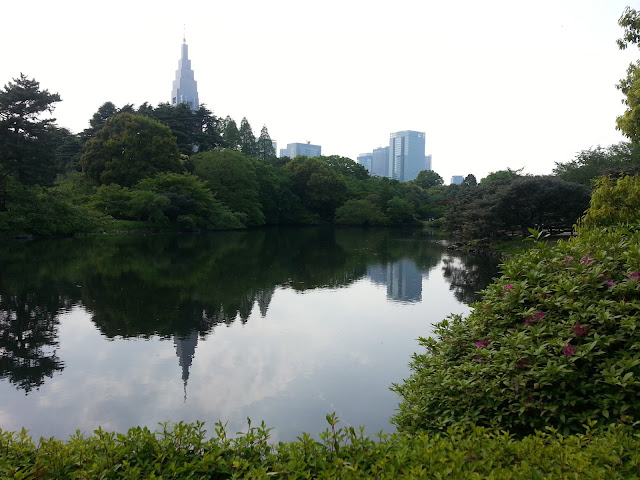 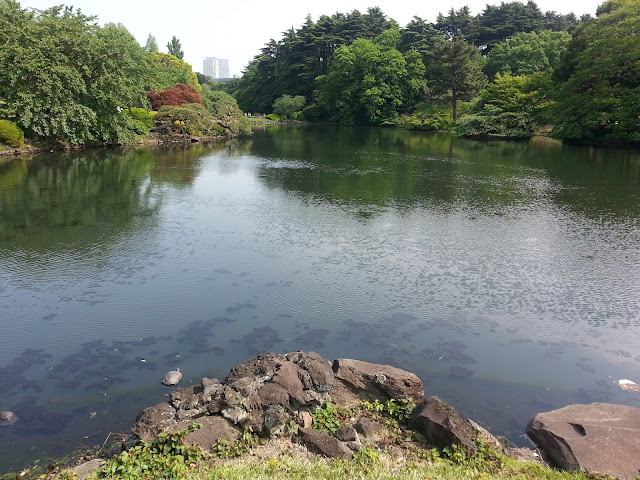 Did you see that, in the bottom left hand corner of the picture?.... 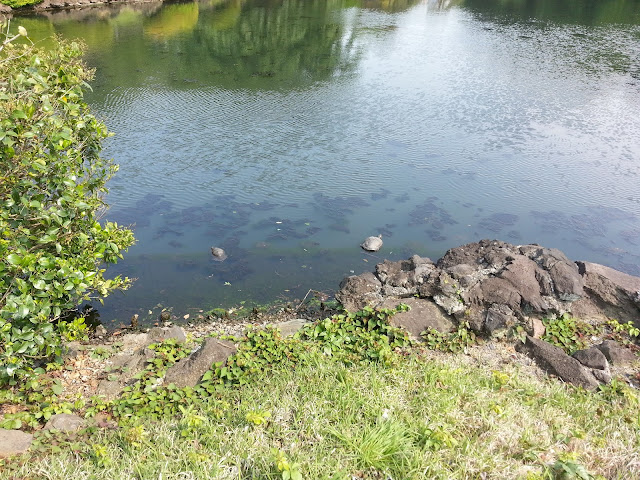 Everyone was out enjoying the sunshine and warmth!

A little further into the park, it started to take on more of a wild foresty look which was a nice contrast! 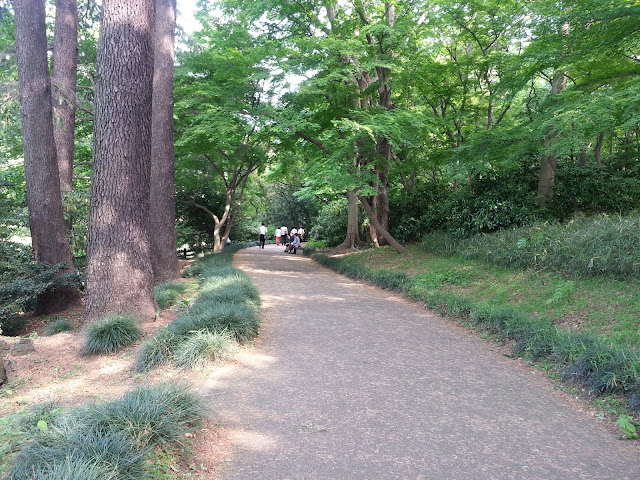 Much less cultivated and manicured, being left to take on its own look and to create its own vibe! 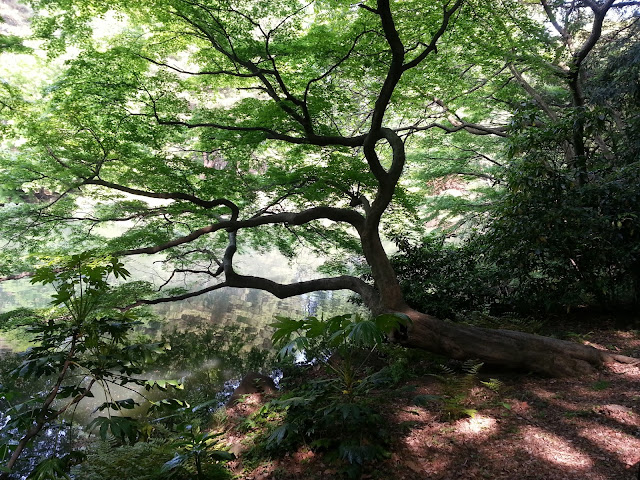 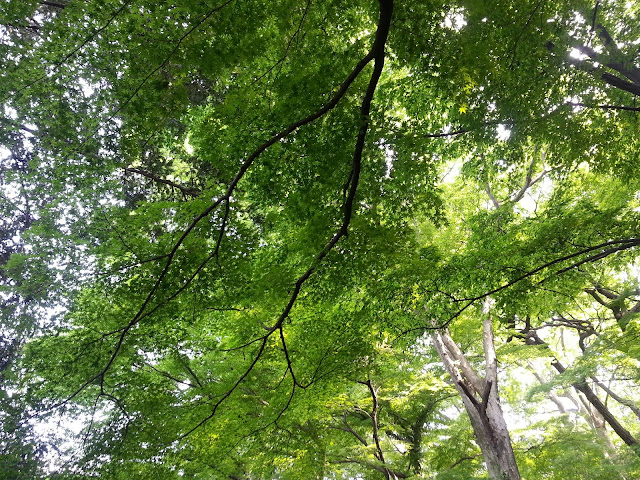 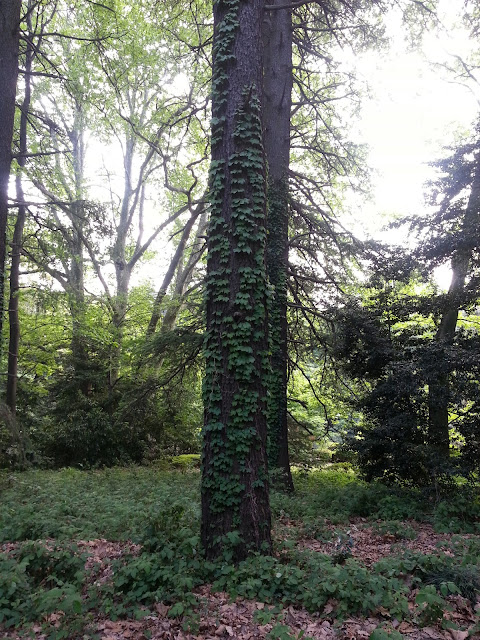 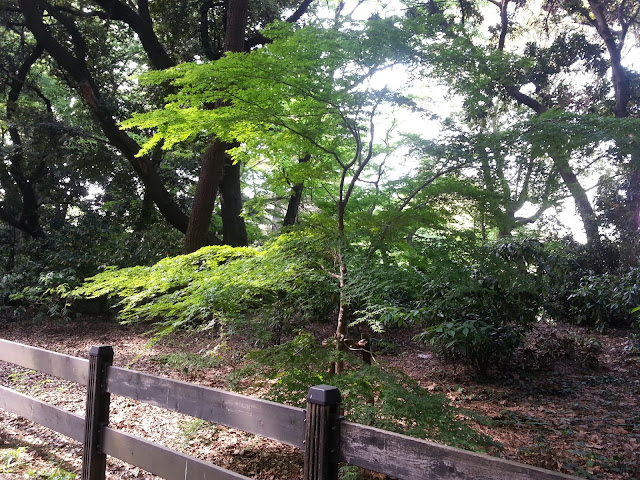 Beach too far away?  Hey, no problem, head on over to Shinjuku Gyoen! 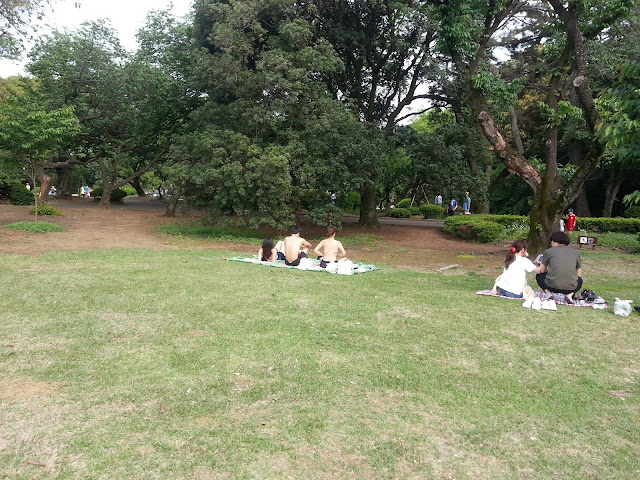 How much time should you set aside to visit the park?  A good 3 or 4 hours to fully enjoy all aspects of the park, 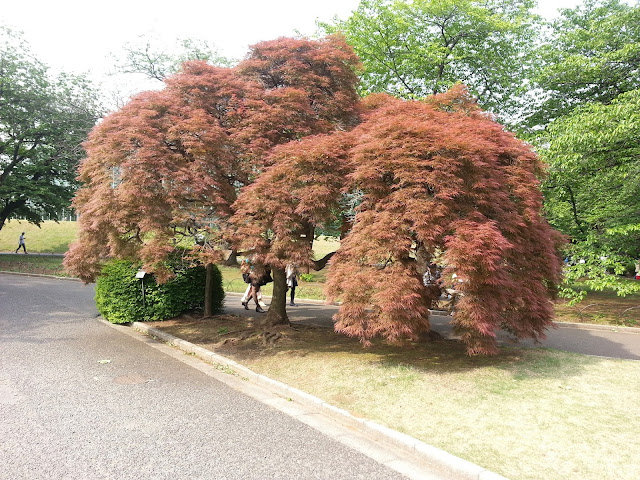 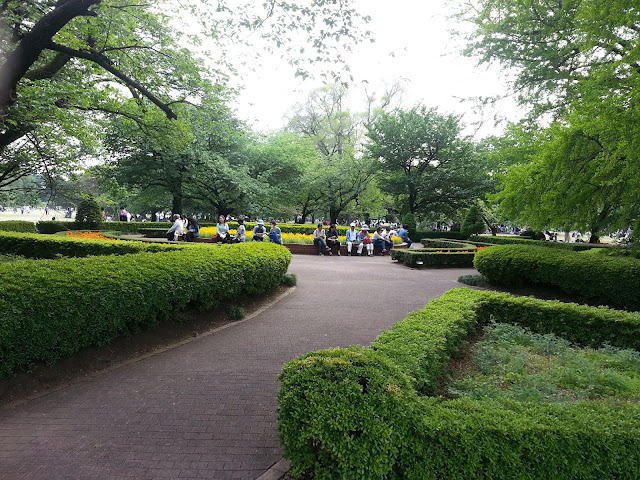 or all day if you have nothing else on! 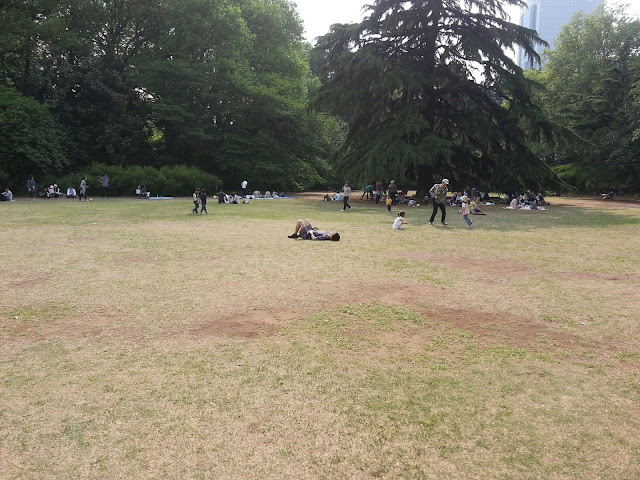 On a day like it was, I don't blame him!

Well, that's it for another post.  I hope you liked it.  Please leave a comment below, I'd love to hear from you.  Until next time, bye!
Posted by jase8au at 18:28