People who often read this blog will know that I love old Japan.  I love old Japanese architecture.  I love the feeling that I get walking along streets filled with 200 or 300 year old buildings, the feeling of knowing that my people's history in my own country is but a drop in the ocean compared to how long other things have been happening in the rest of the world (and also in indigenous Australia too, especially in indigenous Australia whose history dates back over 40,000 years).  It is, for me, a very humbling and a very real moment each time I walk along these streets.  Time and time again I seek out these places and this blog is filled with posts about these cities, towns and villages from Kawagoe, Narai, Tsumago and Magome, Takayama, Shirakawa-go and many more, and believe me, I'm far from done!  There are enough of these old towns and villages in Japan to last me a lifetime of blog posts!

The one thing that I notice is that different regions of Japan and different eras in Japan's history have different architectural styles.  From the steep sloping roofs of the gassho zukuri styles houses of Shirakawa-go to the beautiful rustic wood facade of the Edo period houses of Takayama and Tsumago to the big, solid black structures (that look like they could withstand anything mother nature decided to throw against them) of Kawagoe.  I have travelled many a mile to see them and will continue to do so.  But what if someone told you that you could see all of these in one convenient location?  Well, that's what happened to me.  My friend Keiko pointed out that there exists such a place hidden away in the sleepy suburbs of west Tokyo.  Surely not!  How can there possibly exist such a utopia, an architectural Shangri-la in my own backyard and I not know about it?  Well, that's one of the things I love about Japan, and why I will probably be here forever.  Japan never fails to surprise.

The Tokyo Edo Open Air Museum (located nearby Musashi Koganei station) was established by the Tokyo Metropolitan Government in 1993 to preserve and protect examples of the rich history of Japanese architecture for future generations of both Japanese and visitors alike to experience and enjoy.  Buildings were dismantled from various locations around the country and transported to the location of the museum and painstakingly re-built.  The buildings all retain perfect authenticity and great steps are made to maintain that.

One day recently I decided that the Open Air Museum was well overdue a visit so I got onto the Chuo line and made my way over to Musashi Koganei.  Come out of the north exit and you can catch a bus to the museum, or, as I did, you can decide it's a nice day for a walk and set off on foot.  It is only a 20-30 minute walk (actually, I didn't know about the bus until after I arrived at the museum, and it wasn't really a nice day for a walk, it was cold!).

The museum is located in the middle of Toritsu Koganei Park, and walking into the park, soon the museum entrance and office loomed large in front of me. 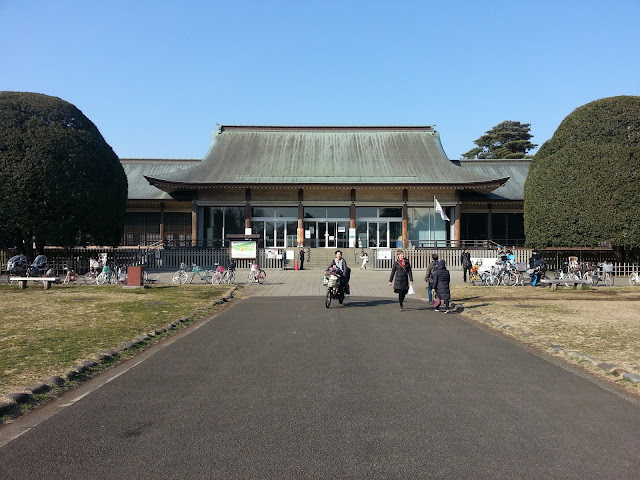 I handed over the (very reasonable) 400 yen entrance fee and made my way out the other side and began exploring.

The first building I came to was actually a building that one of my students, Ayumi, had talked to me about only a few days previously.  She showed me a floor plan and drawing of the building that she, herself, had made.  Being that she is an urban design student, her version of the building was very accurate.  It is the house of a quite famous Japanese architect, Kunio Mayekawa, which was built in Shinagawa in 1942. 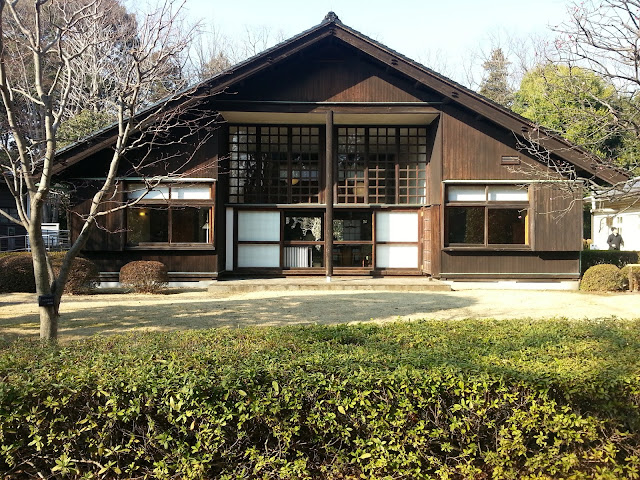 A beautiful building.  The great thing about the museum is that you can walk inside all of the buildings, so taking my shoes off, I stepped inside the house.  It was nice and spacious inside (well, compared to my place it was....) and the house was furnished with period furniture and looked like you could move in straight away and start living there! 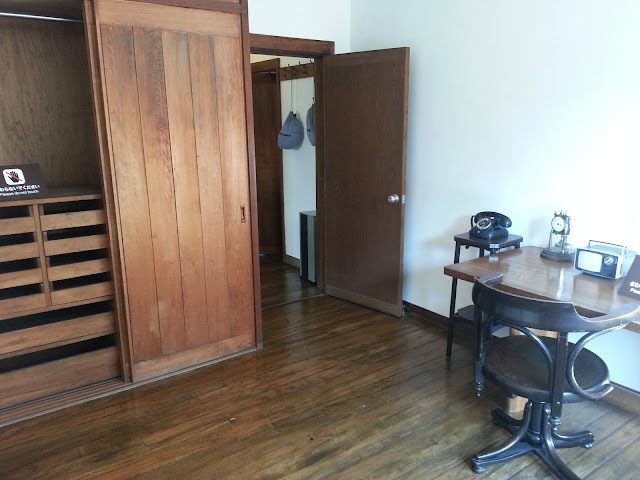 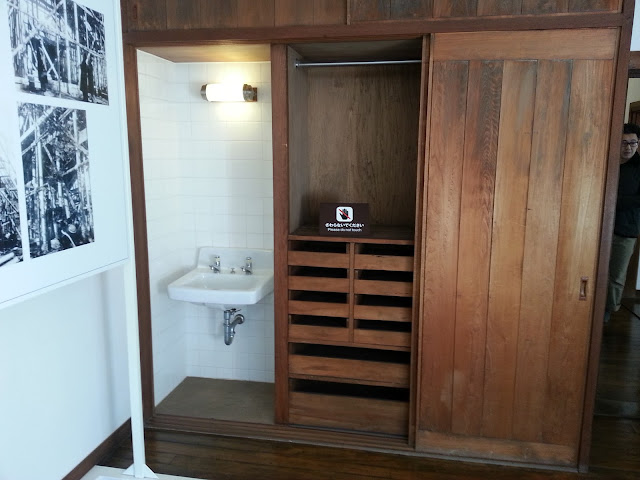 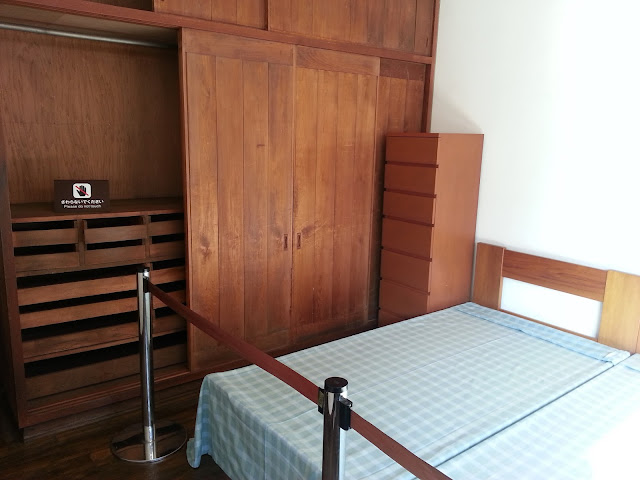 Saying thank you to the nice attendant, I made my way back out and continued on to the next display.

Next in line was a beautiful and grand example of a western style Japanese home that was constructed in 1910 in the Shinjuku area. 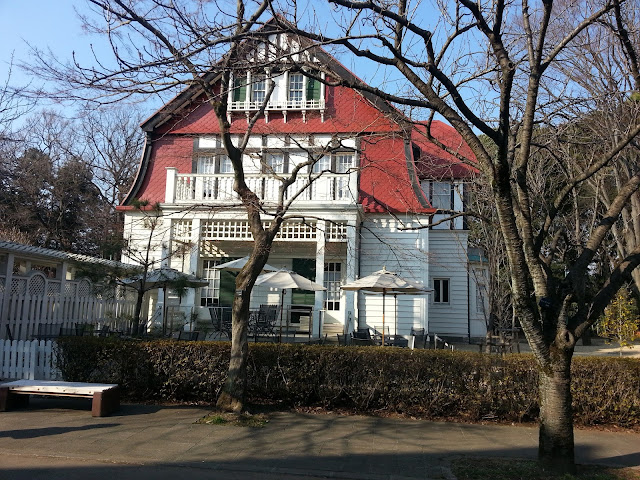 Inside the building now is a restaurant for museum patrons to enjoy.

Further along was this house. 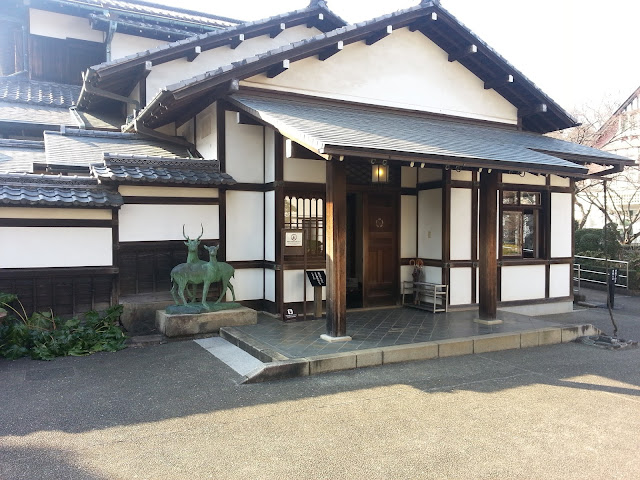 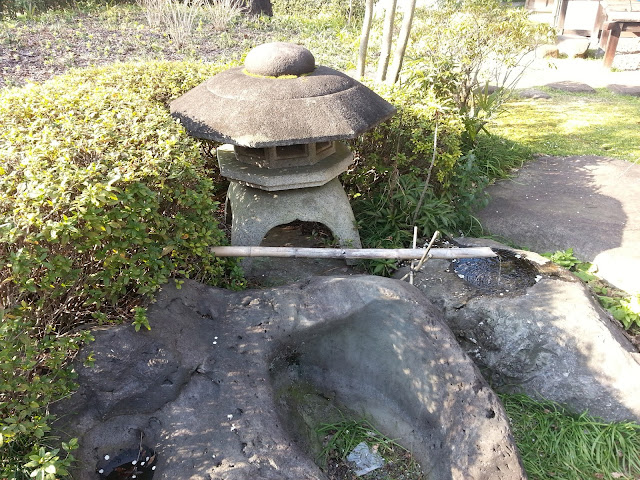 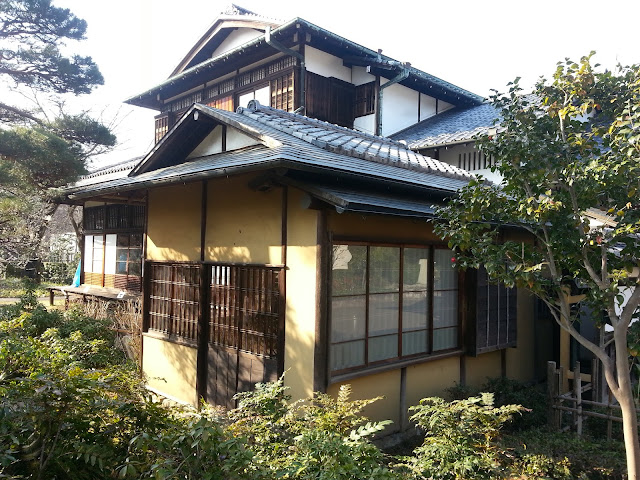 Parts of this house actually date back to the late 19th century.  Over time, more and more was added until the final piece was added in 1952.  I really love the roof tiling on these kinds of places.

I kept moving on and next along the path was this beautiful old house. 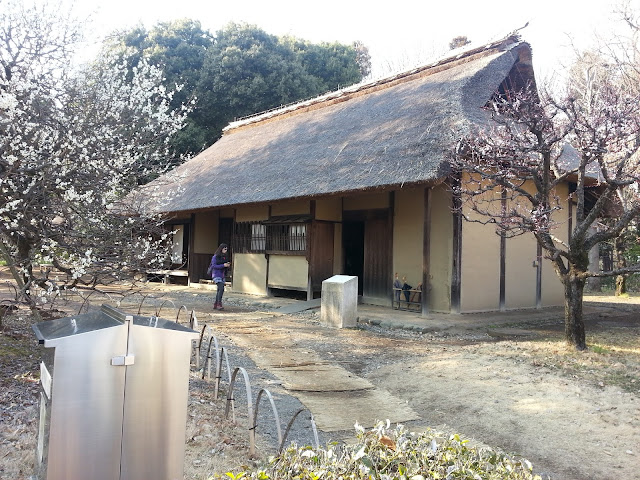 Built in the mid 19th century, the (English!) guide that I was looking at told me.  I loved the thatched roof on this one. 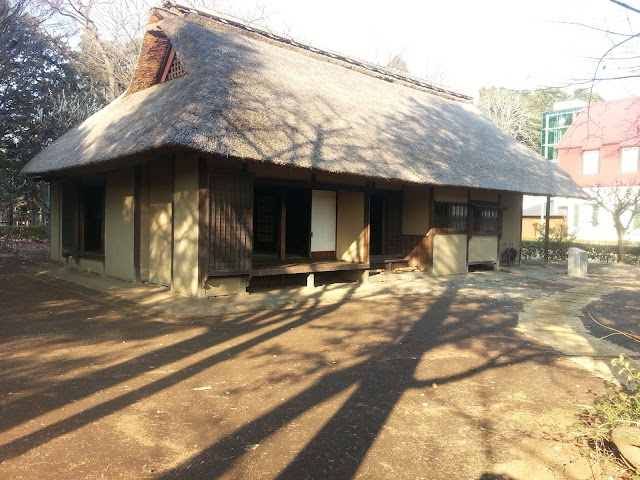 As you can see, the house was opened up, so I walked up to have a look inside. 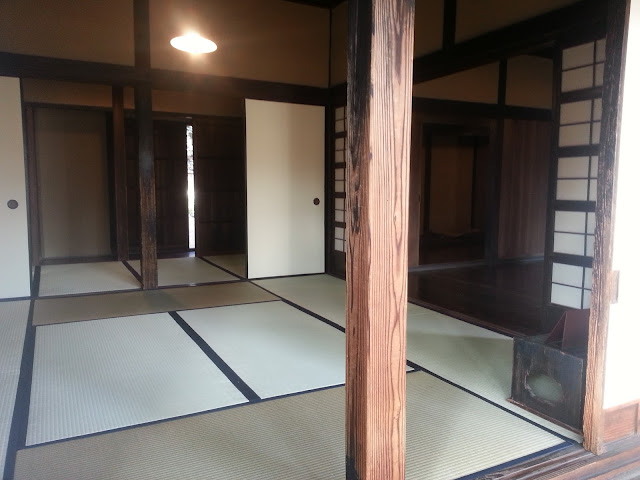 I stepped inside and had a wander around.  The rooms were gorgeous and I wasn't the only one out enjoying the day and the museum. 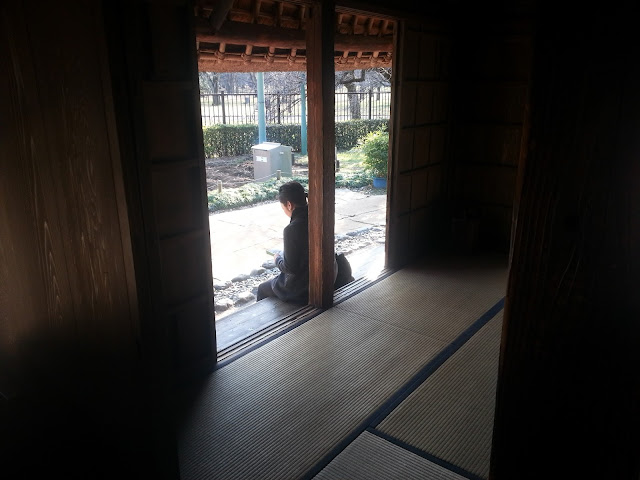 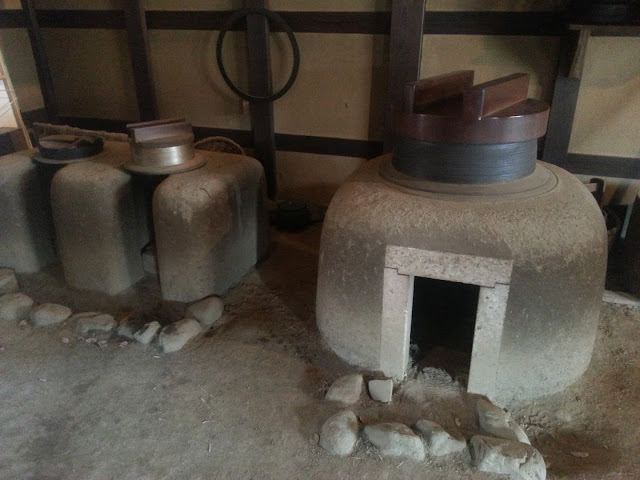 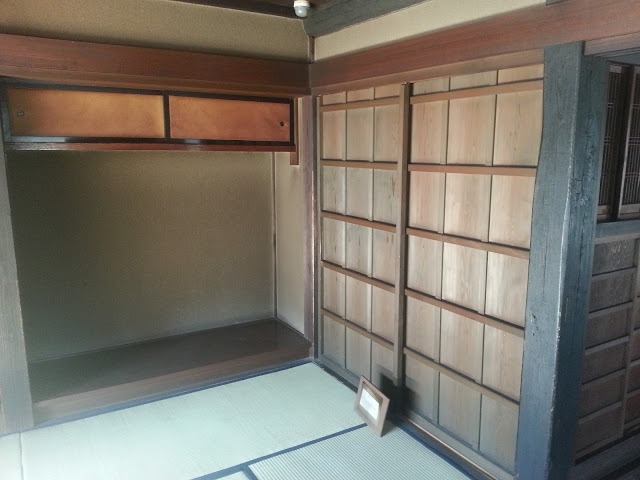 Stepping outside and turning the corner I was stunned by what was in front of me.  They were just getting more and more amazing as each new one appeared!  This one, a stunning old farmhouse was built in the 1700's. 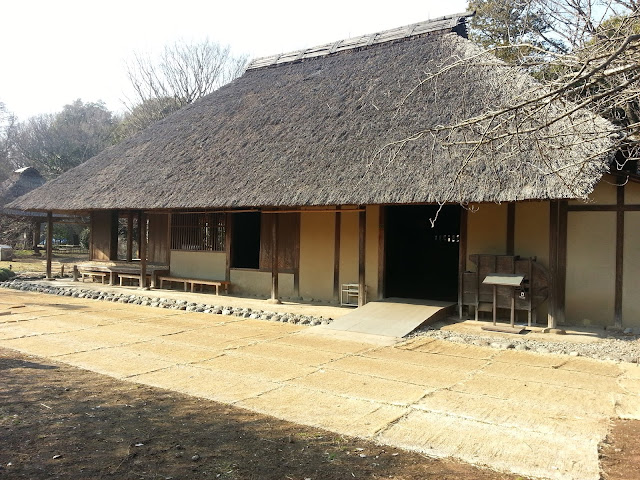 Absolutely beautiful!  Unfortunately these guys had decided that the early blooming cherry blossoms were more worthy of their attention..... 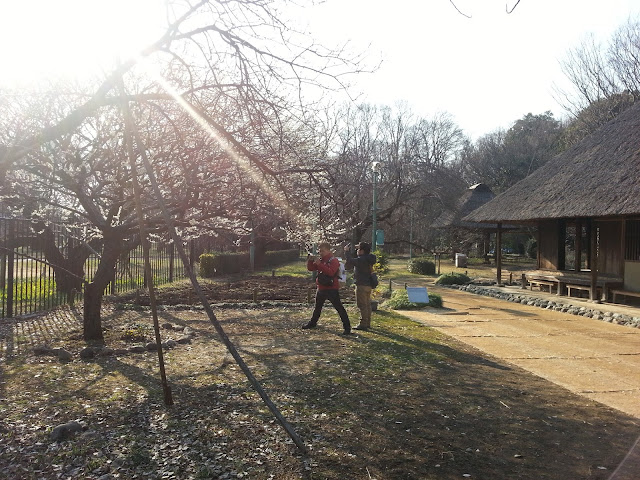 Crazy!!  Leaving them to their tree I decided to step inside.  The smell of smoke was thick in the air as someone had obviously lit the fire at some stage during the day.  One of my students told me that the smoke from the fire was a useful insect repellent that kept mosquitoes away.  He also said that it would take such a long time to replace the roofs that everyone in the community would help one family replace their roof each year.  The next year it would be someone else's turn to have theirs replaced and so on.

Tearing myself away from this house I move on to the next lovely old farmhouse. 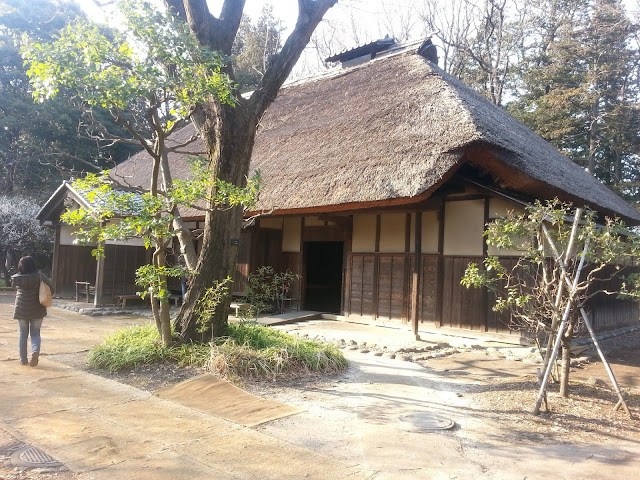 The smell of smoke hung in the air in this one too. 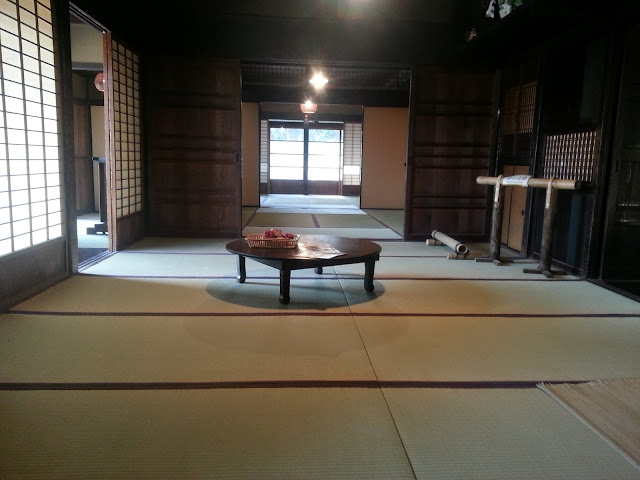 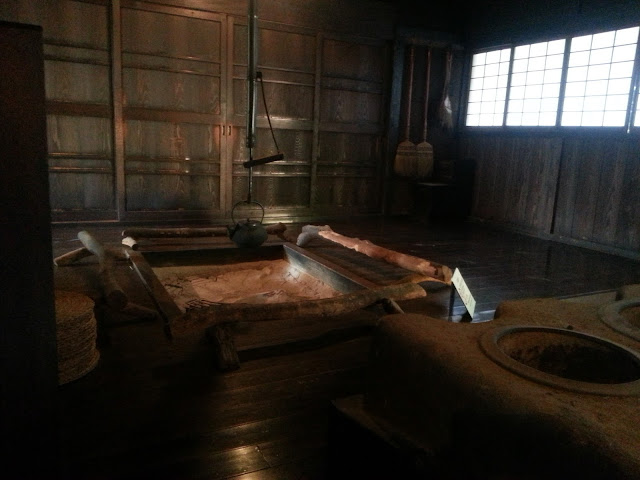 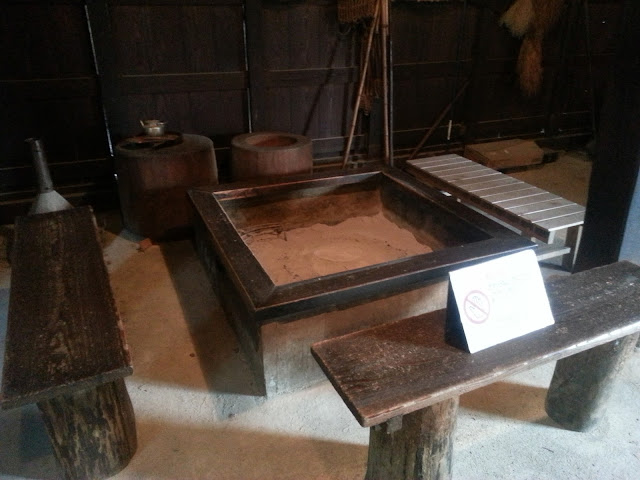 Honestly, install a couple of air conditioners and I would move in straight away!  All of the houses I had seen so far, especially the last 3 had left me speechless with little shivers of excitement tingling up and down my spine!

I think I might split this post into 2 parts or it might be a bit long otherwise.  Thanks for reading, as always, I hope you enjoyed it, and stay tuned for part 2 soon.
Posted by jase8au at 02:24