There's no doubt about it.  Japan loves its food and it does food damn well!  In 2010 Japan out-Michelined the home of Michelin, France!  Japan also celebrates its food like no other country.  It has what it calls "food theme parks" one of which is the Shin Yokohama Ramen Museum which I have written about previously (and hopefully another food theme park will be coming to this blog soon!).  One of the foods which is loved almost as much as sushi is ramen and there are various locations or "ramen streets" such as the Shinatatsu Ramen Street and another one inside Tokyo station which I hope to check out soon.

One of my favourite ramen blogs that I read occasionally is the well written and highly respected Ramen Adventures written by an American guy called Brian.  In fact his opinion is so respected that he has been on television in Japan on numerous occasions as a ramen expert.  Anyway, it was through his blog that I found another ramen street in Tachikawa, on the west side of Tokyo.  It is called New York Ramen Square (their website is in Japanese but you can get a rough translation if you use Google Chrome).  One Monday recently I decided to head out west to Tachikawa to check it out.

It is pretty easy to find.  Leave Tachikawa station through the south exit and head across the walkway. 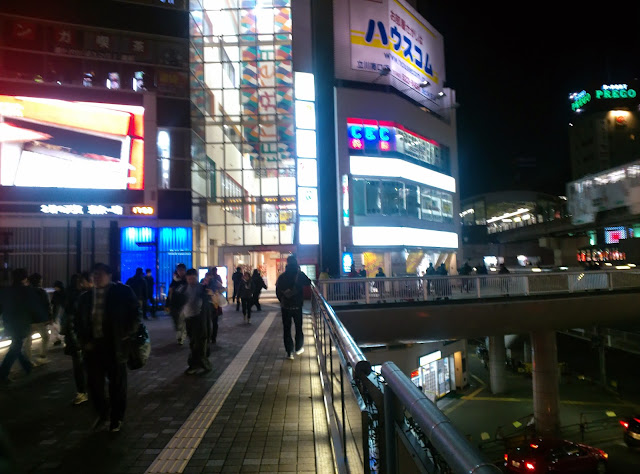 You want to go to the Arearea 2 building, 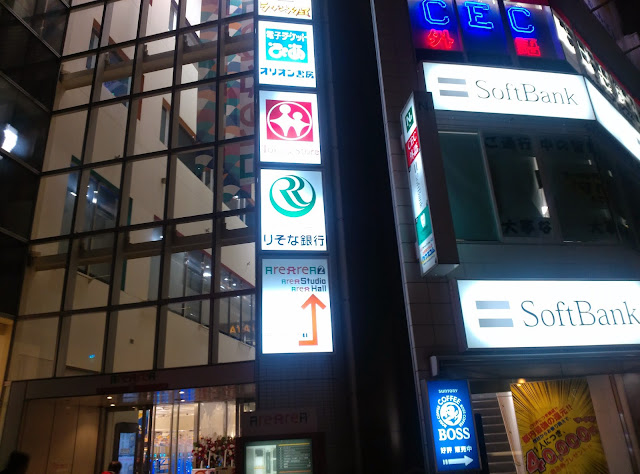 so walk past the Softbank shop and keep going for a little until you see the sign that says "Ramen Square" in both Japanese and English. 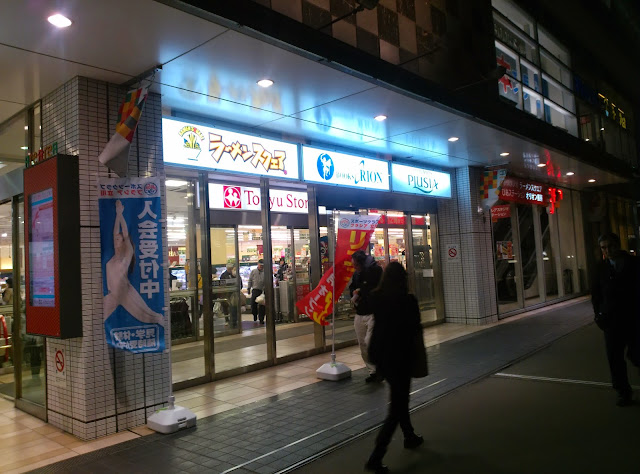 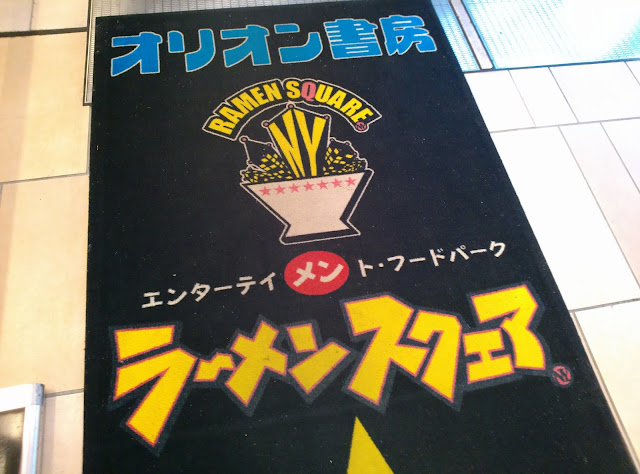 and up the escalators and you have arrived. 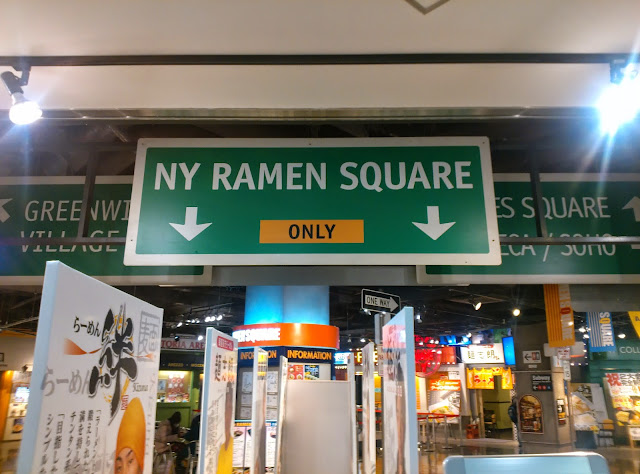 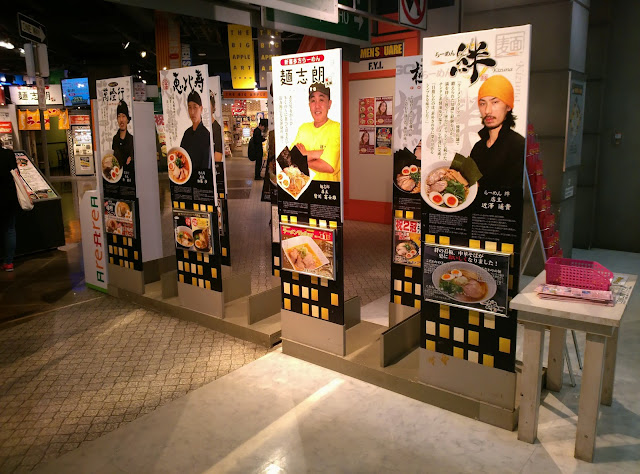 Basically NY Ramen Square is home to 7 different ramen shops.  A lot of the information is only in Japanese, but there are plenty of pictures if you can't read Japanese.

This one has a chicken, beef and seafood base soup. 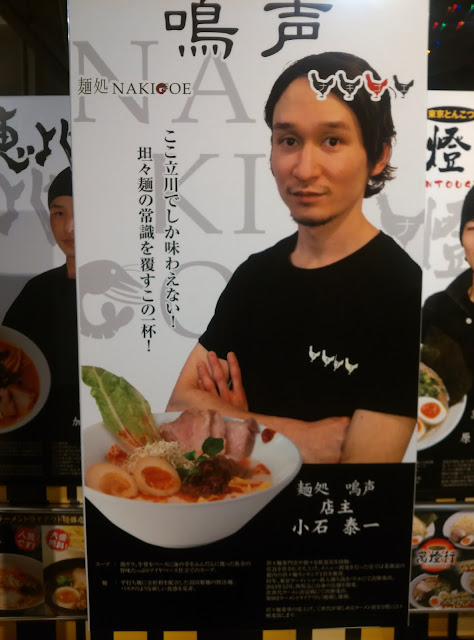 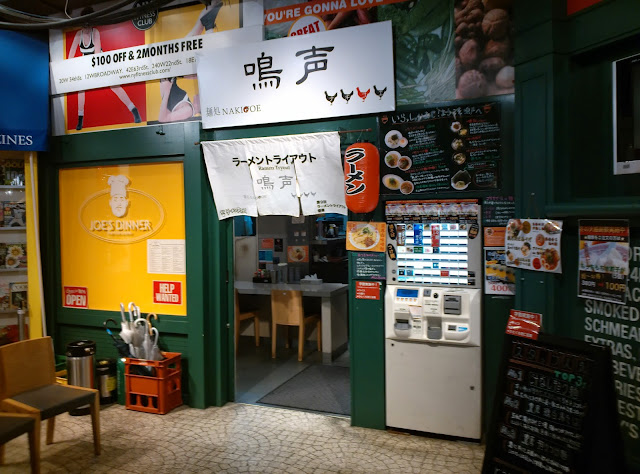 The soup of this one is a combination of soy sauce, fish and chicken going by what I can see on the Ramen Square's website (haven't got a photo of the shop as it came out very blurry). 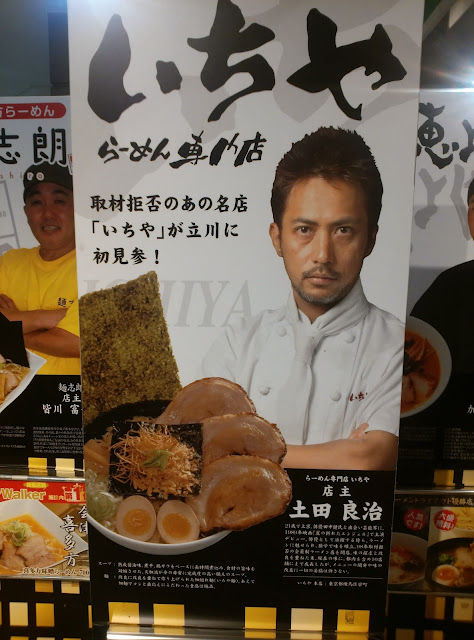 Menshiro has a pork and chicken base. 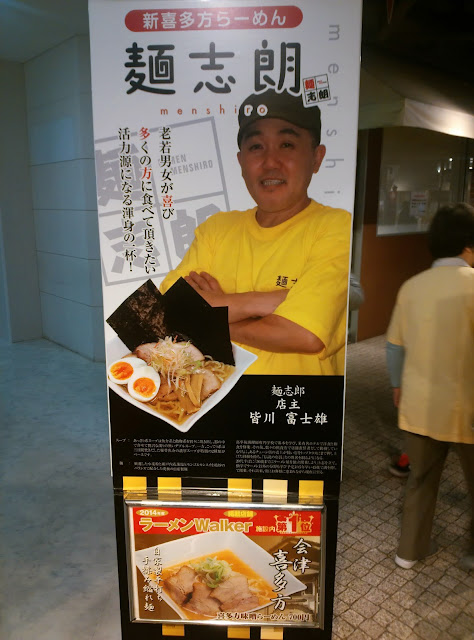 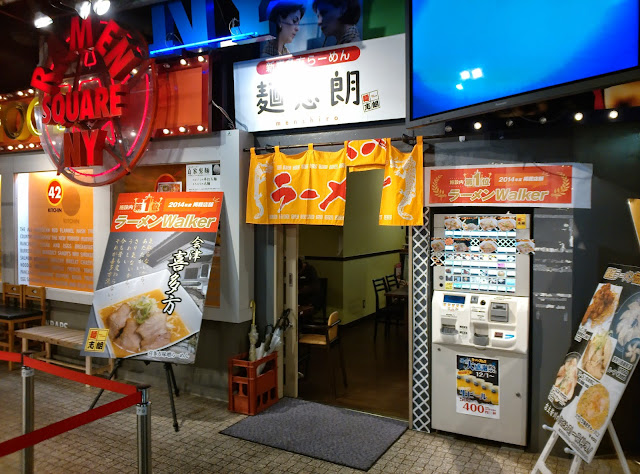 Gokujoe has ramen that has a tonkotsu (or pork soup) base and that char shu (or braised pork) on top looks amazing! 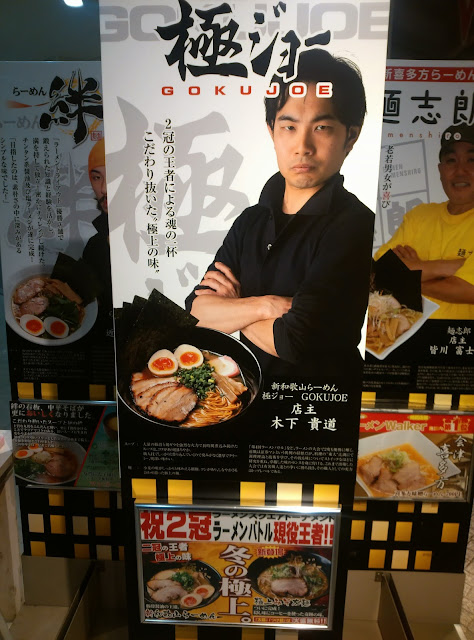 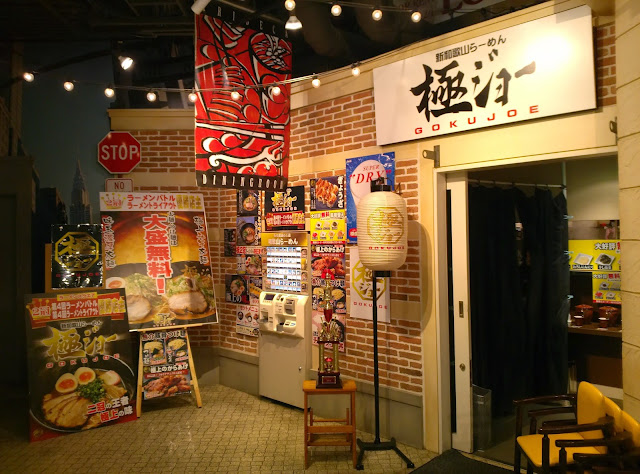 This next one, called Kizuna has a seafood base. 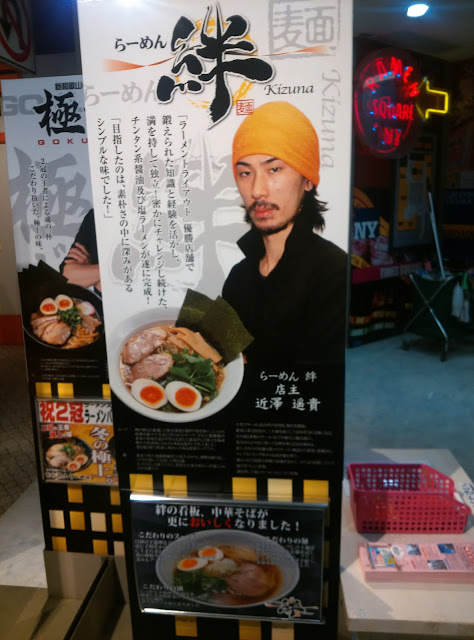 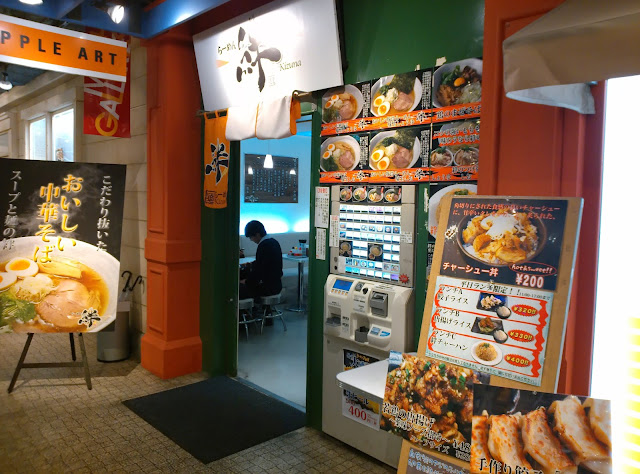 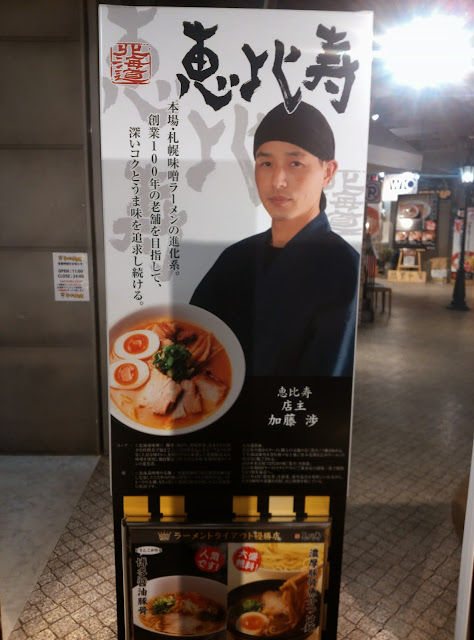 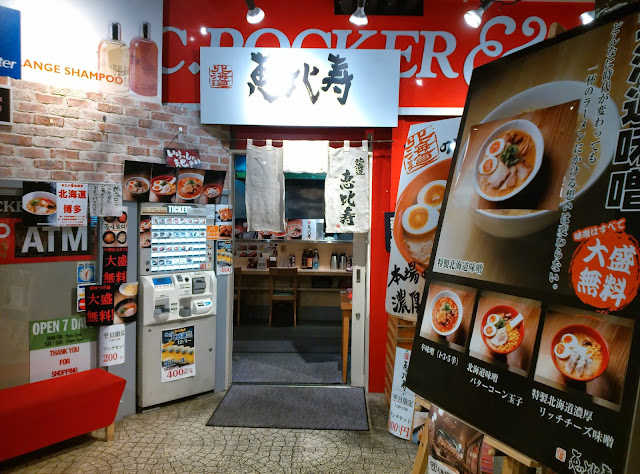 And finally Mantougyo which has a tonkotsu base. 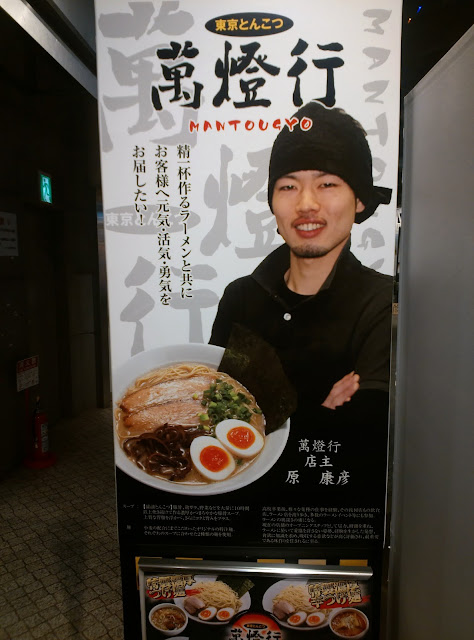 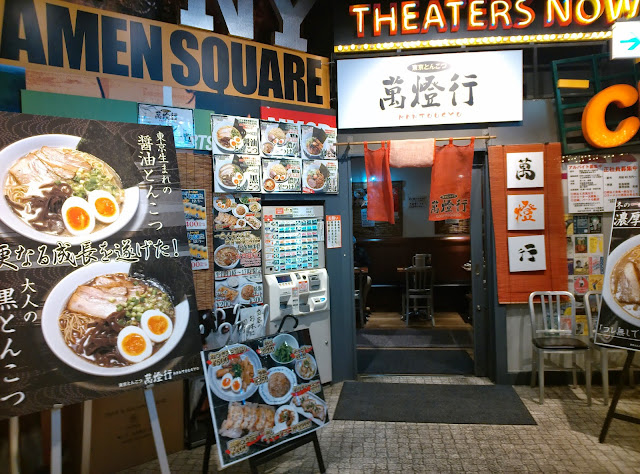 After walking around for about 15 minutes not knowing which one to choose, I finally decided to go with Mantougyo, however I chose a miso ramen that they did using the tonkotsu base.

I went inside, handed over my tickets and waited for my deliciousness to arrive. 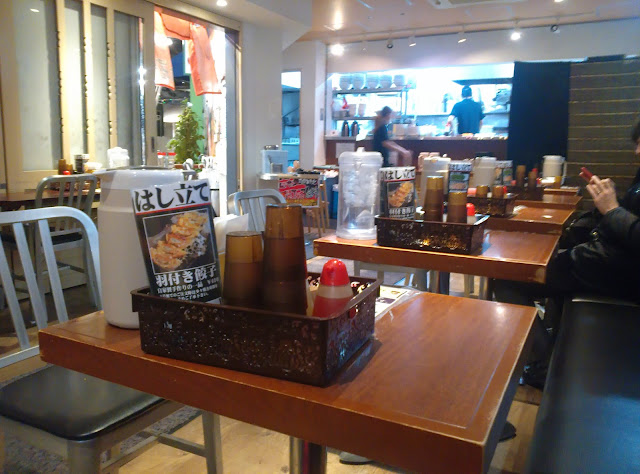 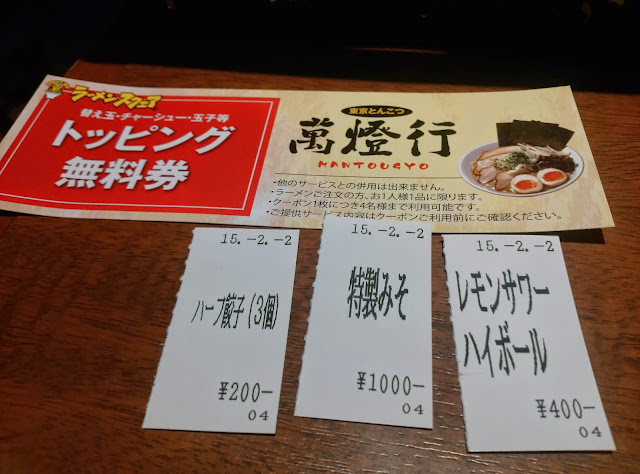 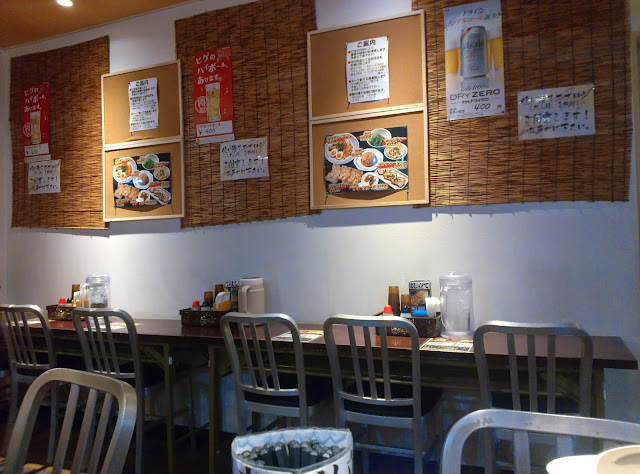 Before too long and with a cheerful "omatase shimashita" ("sorry to have kept you waiting") it had arrived! 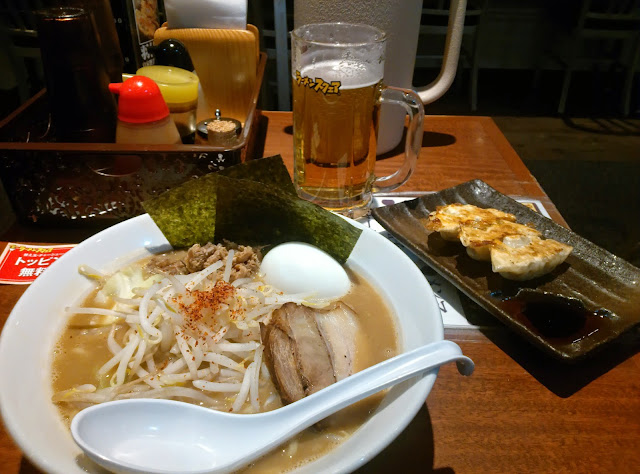 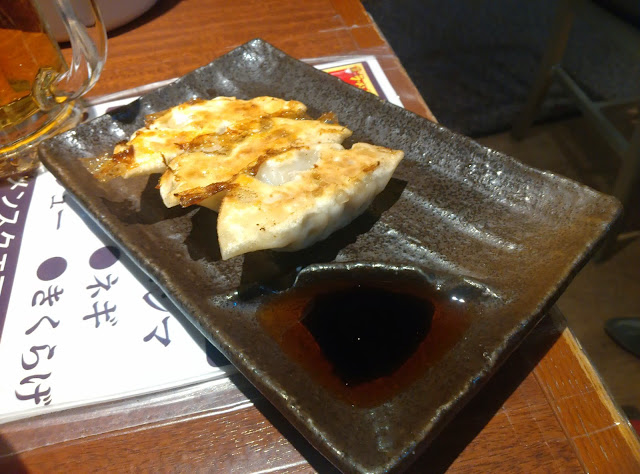 The ramen soup was so thick it wasn't really a soup, it was more like a gravy sauce! 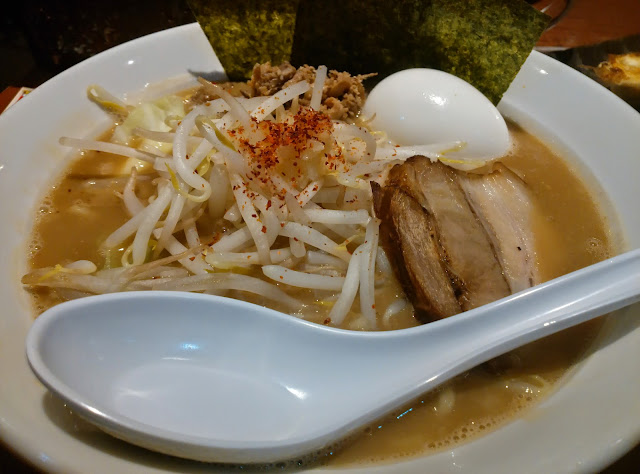 And it was good!! 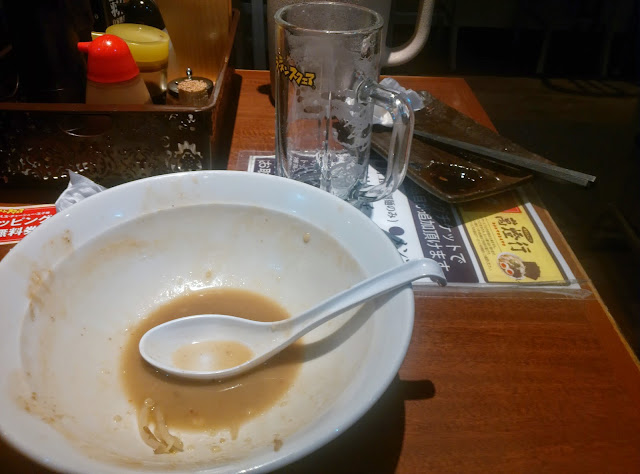 So, if you live or work on the west side of Tokyo near Tachikawa, or even if you just love ramen and live or are staying anywhere in Tokyo, I highly recommend a visit to New York Ramen Square in Tachikawa!