Work at the Port Lincoln Hospital finished last Friday by which stage I had pretty much packed everything and was ready to leave to drive to Adelaide the next day.  It was sad to be leaving the hospital as I had really enjoyed working there.  A great group of people to be working with, especially Jenny, Danielle and Cheryl (I'll always be a laundry lady at heart!)

Last Wednesday signaled my last night in Australia and so had some farewell drinks with friends at the Coopers Alehouse in Adelaide. The Alehouse has always been my favourite pub in Adelaide so it was appropriate that it was the location for drinks.  I have to say thanks to everyone who turned up, it was really humbling to see so many people come to say goodbye.

I had a nice moment at the airport with my brother Matthew.  20 years ago on my 21st birthday, my father gave me the "keys to the house", which means that you are welcome to return anytime.  In Port Lincoln I had been living with Matthew and so I had a set of house keys.  I went to return them to him at the airport and he simply told me to keep them for anytime that I returned.  That moment of handing over the keys came full circle!  At the airport I had my 2 closest friends (Warren and Daz) and my brother there to say goodbye and I must admit that I did shed a quiet tear as I walked away and left them.  I am absolutely blessed to have such a great group of friends and family all of who are very special to me, and to be saying goodbye is such a difficult thing to do.  In the year 2000 when I first moved to Japan, I was only intending to stay for 1 year, so that farewell was not too bad.  This time, I am looking at this as a long term move so it is so much harder to say goodbye.  My family and friends do realise that moving back to Japan is something that was probably inevitable, so everyone has been supportive of this decision.

So my flight went through Kuala Lumpur where I had about 5 hours wait for my connecting flight. The connecting flight was delayed by an hour which caused some problems when I landed in Tokyo.  I had organised to meet my landlord at 11am to move into my new house, but because of the delay I was late arriving and missed him.  A few phone calls later and I met up with him and was taken to my new home.  My bedroom has a couple of big windows that let a lot of light in, which is great.  One of the windows opens out onto a small bamboo "forest" which is fantastic!  My very own little patch of nature in the middle of Tokyo! 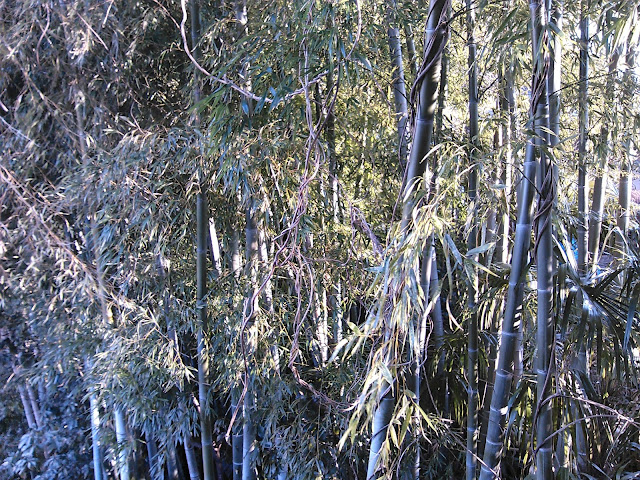 A couple of things happened to me on this first day in Tokyo that so truly represent what I love about Japanese people.  When I arrived at the airport (which consists of 2 terminals), I had to make my way by shuttle bus to the other terminal to pick up a Japanese sim card for my phone that I had ordered.  So there I was with my 2 suitcases, laptop and carry-on bag waiting for the bus.  When it arrives a Japanese guy comes up to me and asks if I am catching this bus.  When I said "yes", he took hold of one of the suitcases and the laptop and tells me that he will help.  He then gets on the bus with me and when the bus gets to the other terminal, helps me off the bus with my bags, gets a luggage trolley for me and helps me load them on.  Now, I don't even know if this guy was even intending to go to this terminal, but it just wasn't any trouble at all for him to help me out!  Later that day before I had met with the landlord, I was walking around the streets of Tokyo (Shibuya) looking for their office and an old man came up to me and asked if I needed any help.  I explained that I was looking for the real estate company's offices.  He didn't know where they were, but stopped and had a chat with me anyway.  He asked where I come from and I told him Australia.  He then said "Oh, Australia is very hot now, summer.  Lots of fires and storms and water and....and....Tasmanian Devils!!  Very dangerous place!"  He then asked me how old I was.  I told him 41 and he laughed and said "I am 81, twice your age!!" He pointed me back to the train station where he told me I would find an information counter and sent me on my way!  A couple of very nice experiences already!

So after settling in to my new home I decided to go for a walk to have a look around my new neighbourhood.  Not far from my house I discovered a little Shinto Shrine. 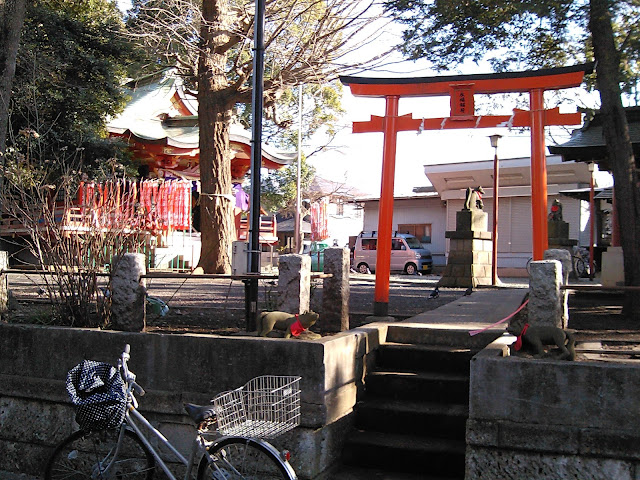 In that picture, just before that gates, at the top of the steps you can see a couple of small statues: 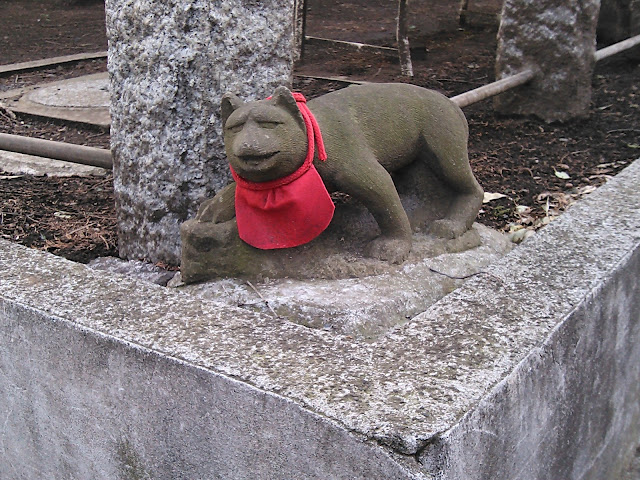 I'm not sure what they are representing, maybe guarding the temple, but I look forward to finding out about them.

A little further on, I came across this.  it looks like a Shinto shrine, although I could be wrong, I'm not really an expert! 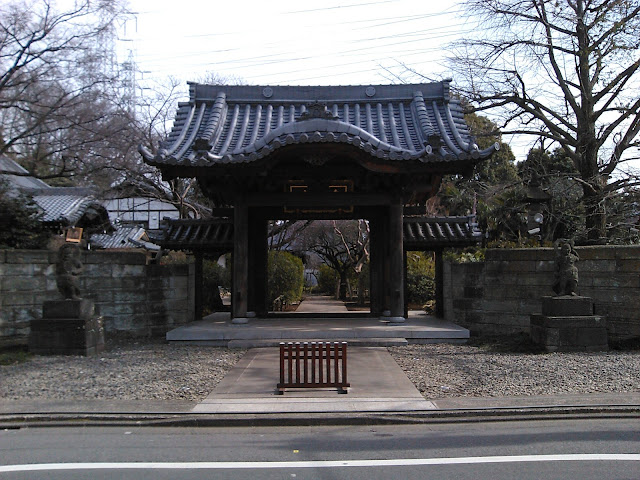 Then I stumbled across my most important find so far!  I discovered, right outside my train station, a liquor store that sells my favourite beer that is made in Adelaide! 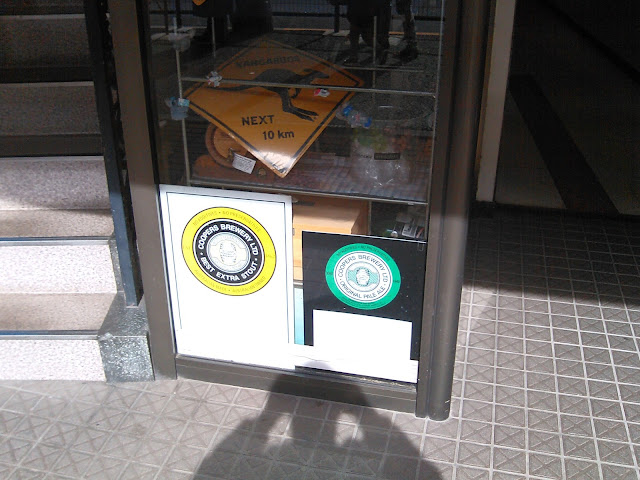 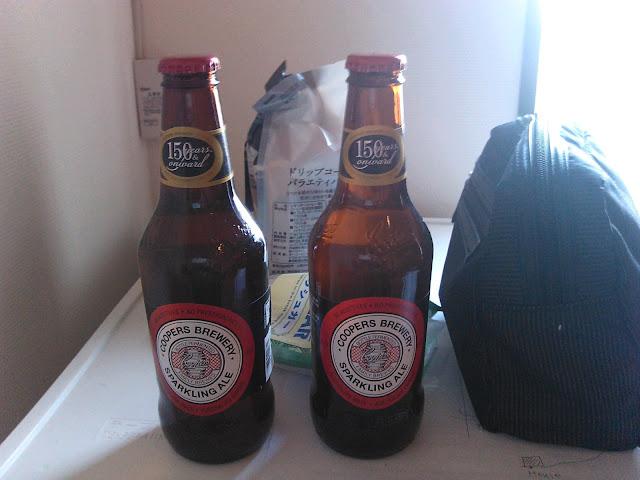 So, of course I had to get a couple!  It just feels like I was supposed to be living in this part of Tokyo!!

I have met a few of my housemates who all seem very friendly.  The house has a mix of Japanese and Korean people with me thrown in as well.  The ones I have spoken to speak pretty good English, now I have to improve my Japanese (and learn some Korean too!).

Tomorrow is a public holiday so I might catch a train out of Tokyo and see if I can find some snow somewhere!  Then on Tuesday I have to go to the local government office to register my address with them and open a bank account.  After that I will be ready to go to my work, sign my contract and start training.

I'm looking forward to all of that happening and will give another update soon!